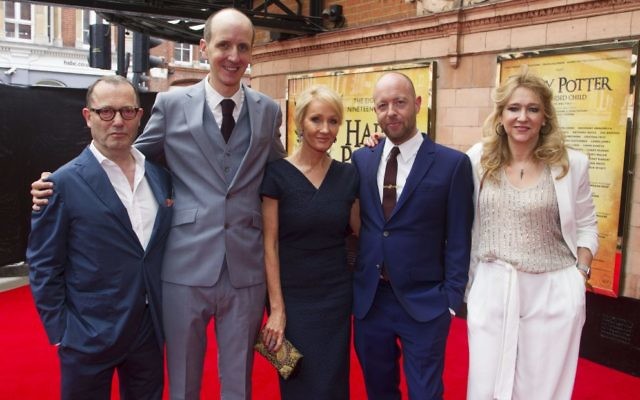 WHEN two of London’s leading producers, Sonia Friedman and Colin Callender, teamed up to pitch an idea for a stage play to Harry Potter creator J K Rowling, they hit gold.

The two Jewish producers – who have enjoyed success on the West End and Broadway with shows including The Book of Mormon, Jerusalem and Dear Evan Hansen – heard that other producers had approached Rowling with proposals for a Harry Potter stage spectacular.

Friedman and Callender didn’t want to adapt any of her Harry Potter books – which have sold more than 500 million copies – but instead create a new play exploring how Harry would cope as a parent.

“People had approached J K Rowling about doing musicals or a stadium show, but she had turned them all down,” Callender told The AJN by phone from New York.

“We went to her with our idea for a play. The epilogue in Rowling’s last book, Harry Potter and The Deathly Hollows, was Harry sending his son Albus to Hogwarts and that becomes the first scene of the play, set on platform Nine and Three Quarters.

“At its core it is an emotional story about a father and his son – their relationship and the challenges that they face.  J K Rowling embraced the idea and gave us her blessing to move forward.”

That was in 2012 and Callender said the next step was to hire a director, John Tiffany, and writer Jack Thorne – who was a Harry Potter fan – and they worked with Rowling to evolve the story.

“Jack went off to write drafts and Rowling read the versions and she was wonderfully supportive and collaborative and that’s how it evolved.”

Rowling shares billing with Thorne and Tiffany for Harry Potter and The Cursed Child, which had its world premiere in London in 2016 followed by New York last year, and has its Australian premiere on February 23 at the Princess Theatre, where it is booked for at least two years and is set to become the longest-running stage show Melbourne has ever seen.

The Princess Theatre has undergone more than $6 million in renovations for the play, including new facades, foyer and seating to create a special experience for audiences.

Harry Potter and the Cursed Child is staged in two parts, each running for more than two hours. Tickets can be booked for both shows in one day or for consecutive nights.

The cast of 42 is led by Gareth Reeves as Harry Potter, Lucy Goleby as his wife Ginny, Sean Rees-Wemyss as their son Albus and Gyton Grantley as Ron Weasley.

“You are spending the day in the theatre so it was important to create an environment that takes you out of the real world and into the world of Harry Potter,” said Callender.

“Coming to the show has become a real event and most people see both parts on the same day. Friends and families come together and sit in the same seats for each part and make a big day out of it.”

Callender, 66, grew up in North London and his family were members at the local Orthodox synagogue.

“It was burnt down by a group of neo-Nazis just a week before my bar mitzvah, so I had my bar mitzvah in a school gym,” he recalled.

“We grew up in the shadow of the Holocaust. My parents were active Zionists with my mother running Magen David Adom in England.

“Growing up in London in the 1960s we were reminded daily that we were Jewish – there were fights in the streets between kids and there was a lot of antisemitism. It was a defining part of my youth.”

Callender’s parents were keen on the theatre and took him to shows from an early age.

“I did some acting when I was a teenager with the National Youth Theatre, which produced many great British actors but I was not one of them,” he recalled with a laugh.

“I was inevitably the third spear-carrier on the left! I realised early that acting was not going to be my life’s work. I found that I enjoyed making things happen, whether in film or on stage.”

After studying at the University of East Anglia, where he directed some amateur productions, Callender became stage manager at the Royal Court Theatre in London before joining Granada Television as a graduate trainee.

In 1979 he became managing director of Primetime Television, an independent production company, and won an Emmy Award in 1983 for the nine-hour TV series The Life and Adventures of Nicholas Nickleby.

In 1999 Callender moved to Los Angeles to become president of HBO Films, a role he held until 2008 when he left the company and moved to New York to produce theatre. In 2012 he founded Playground to develop and produce television, theatre and film for the American and British markets.

In 2016 he was knighted for -services to the British creative industries.

These days Callender divides his time between New York and London with theatre and TV productions.

It is also the first time he has worked closely with Friedman, who has been producing plays since the late 1980s.

“Sonia was involved in a Tom Hanks play by Nora Ephron that I had produced in New York, but this was the first time we really worked together as producers side by side on a new show.”

Harry Potter and the Cursed Child has its Australian premiere on February 23 at the Princess Theatre, Melbourne. Bookings: HarryPotterThePlay.com