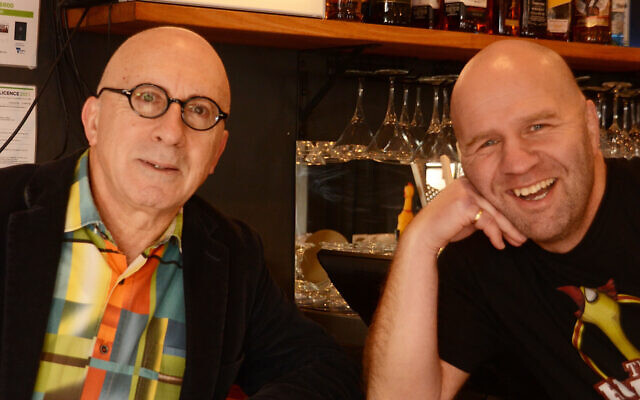 Jewish comedians Ben Horowitz (right) and Jack Levi, for whom The Elliot Goblet Bar is named.

All Ben Horowitz wants to do is make people laugh. Following 31 professional fights as a boxer, Horowitz turned to comedy, and ever since, he has had a ball interacting with people while on stage.

“I spent 25 years getting punched in the face for money, and making jokes,” said Horowitz. “But there’s an obvious reason why you haven’t heard of me through boxing – I didn’t win much.”

Despite, in Horowitz’s words, never being taken off his feet, he claims he didn’t see much success in boxing, and decided to pursue a career as a stand-up comedian instead.

Horowitz has been performing comedy since 2001, including shows at the Melbourne International Comedy Festival (MICF) and “at every type of occasion imaginable”. He’s also the co-founder of the School of Hard Knock Knocks, a stand-up comedy school, which operates in Melbourne, Adelaide and Sydney.

Horowitz mixes quick wit with relatable stories, but always keeps it clean. “I don’t swear, I don’t do any blue humour,” Horowitz explained. “I can come across as very brash and loud and boorish, but the last thing I want to do is be that ex-fighter scaring people with such a loud persona, so I keep it clean.”

A big goal for Horowitz was working towards having ­stories from other appearances to customise to his audiences.

“When I first started doing comedy, I always looked at comics who had jokes or stories from other gigs,” he said.

And now, he has plenty of them with more than two decades under his comedy belt.

Later this month, Horowitz will be joined on stage by fellow Jewish comedians Jack Levi (also known as Elliot Goblet), Michael Shafar and David Rose for Yentl As Anything. The show, which will be performed at The Rubber Chicken in South Melbourne on July 30, is sure to be a laugh a minute.

Goblet, for whom the bar downstairs at The Rubber Chicken is named, has been a headline comedian since the mid-1980s, with more than 60 television comedy appearances.

Shafar, who writes for Channel 10’s The Project, has performed his stand-up comedy around Australia including his latest show, 110%.

Rose has opened for some of the biggest names in the country, and debuted his live show Levinsky at the MICF this year, based on a documentary he produced for ABC National Radio about his Jewish ancestry.

Horowitz is adamant, though, that Yentl As Anything is not a Jewish comedy night, but instead just a bunch of regular comedians who happen to be Jewish, working to make people laugh.

For Horowitz, sitting around with his peers is one of the best parts of the gig. “A lot of comics get away from the gig as soon as they’re done. It’s professional but it’s pretty boring, if you ask me.”

As Horowitz said, The Rubber Chicken is more than a hub for comedy. In fact, the Elliot Goblet bar is a hangout for comedians and comedy-lovers alike.

“If you pop in for a beer, you’ll certainly see some famous faces,” said Horowitz, including those who work behind the bar. The venue has staff with close to 100 years of comedy experience between them. “Not only can they pour beers, but they can jump up and perform impromptu stand-up sets,” Horowitz explained.

Perhaps, after Yentl As Anything, you’ll find the comedians and The Rubber Chicken staff chilling with a beer in hand.

Yentl As Anything is at The Rubber Chicken, 256 Moray St, South Melbourne on July 30 at 8.30pm. Bookings: therubberchicken.com.au