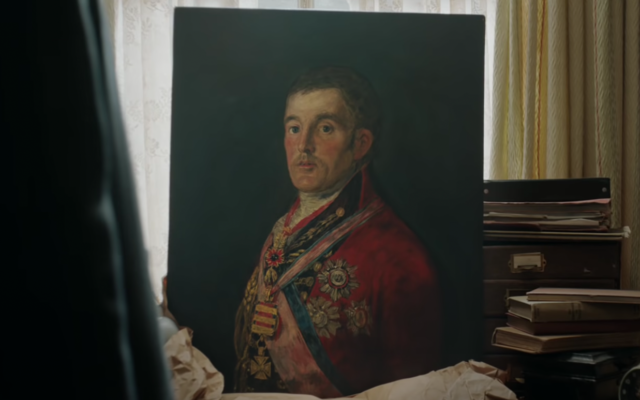 In 1961, when Francisco Goya’s Portrait of the Duke of Wellington was stolen from London’s National Gallery, authorities believed the robbery was the work of experienced criminals. The robbery was so brazen, it captured the attention of the entire nation.

Yet, the culprit was a 60-year-old pensioner from Newcastle by the name of Kempton Bunton.

The artwork is found in the wardrobe by Bunton’s wife, who realises that her husband has truly outdone himself in his battle against social injustice.

As the story goes, Bunton sent ransom notes demanding more care for the elderly – one anecdote shown in the film is Bunton’s arrest for watching TV without a licence. While he can afford to buy one, he refuses to do so because, in his opinion, pensioners shouldn’t have to pay for them.

According to Bentham, who spoke to IF Magazine, the pitch for the film came from Bunton’s grandson Christopher Bunton. The story had largely been buried because the establishment was so embarrassed by what happened. But now, the family want it told.

About the pitch, Bentham said: “It really caught my eye because it was such an absurd, crackpot story of an art heist that I’d never heard of.”

In The Duke, Bunton is played by Jim Broadbent, with Helen Mirren starring alongside as his long-suffering wife, Dorothy.

While Christopher had already written a script himself, Bentham decided to engage Richard Bean and Clive Coleman to further the story. Bunton himself was an unproduced playwright so there was plenty of material for the team to pull from. Plus, of course, there were case files from the robbery itself.

The film was the final feature for Roger Mitchell, who was the first director that Bentham sent the script to. While he initially said no, he eventually accepted the project. Bentham always believed he was the right fit for the job, explaining that he could do humour and large-scale films while also ensuring the film was intimate and audiences could relate to it.

The Duke, premiered at the Venice Film Festival in 2020. Its theatrical release was delayed by the pandemic but it has finally reached Australian shores.

For Bentham though, the release has been bittersweet, with Mitchell, who passed away last September, not able to see it how the film has delighted audiences.

“It’s unbearably sad that he’s not here to see how much the film is delighting audiences. As much as he was quite a singular filmmaker – in that he was never making choices just to be a crowd pleaser, he was always following his own instinct and his own interests – he was making them for the people to enjoy,” she told IF Magazine. “He would have he would have absolutely loved to hear the roaring laughter in the packed houses.”

The story, which Bentham refers to as “stranger than fiction” is told brilliantly by its equally brilliant cast.

The Duke is now showing in cinemas around Australia.