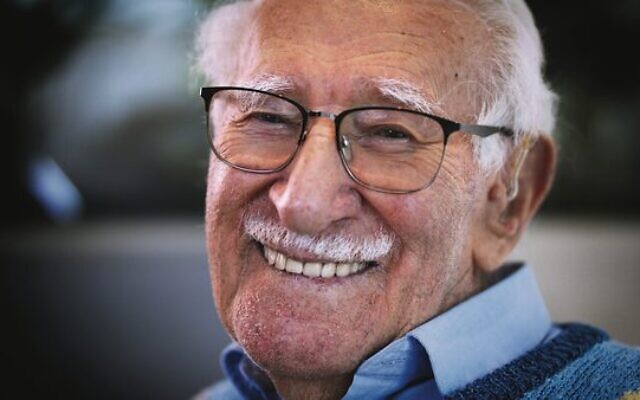 Eddie Jaku during his last interview.

THE late Eddie Jaku’s last ever interview will form part of the NSW Jewish Board of Deputies (JBOD)’s Kristallnacht commemoration, to be held online on Tuesday, November 9.

Jaku filmed the interview specifically for the event, less than two weeks before his passing last month. The theme of the commemoration, “Broken glass, unbroken spirit”, reflects his journey from experiencing Kristallnacht to surviving Auschwitz and Buchenwald, to making a new life in Australia and becoming “the happiest man on earth”.

On Tuesday 9th November, we will come together online to commemorate Kristallnacht – The Night of Broken Glass, and to…

Posted by NSW Jewish Board of Deputies on Monday, October 25, 2021

“Eddie personified the commemoration’s theme of ‘Broken glass, unbroken spirit’. Eddie was almost beaten to death by Nazis on the night of broken glass, and survived numerous concentration camps, yet he still managed to become ‘the happiest man on earth’.

“Eddie’s remarkable positivity reminds us that even when antisemitism threatens us today, we must not allow it to break us.”

Stern said it is “more important than ever” to commemorate the events of Kristallnacht as a reminder of where antisemitic hate can lead.

In addition to the interview with Jaku, a recording of the Sydney Children’s Choir singing There are Always Miracles, a piece composed by Sam Weiss inspired by and using words from Jaku’s book The Happiest Man on Earth, will be played.

“I was extremely humbled to be selected as the composer in residence for the Sydney Children’s Choir, in cultural partnership with the Sydney Jewish Museum. As part of this partnership, it was my job to compose music that related to the themes explored at the museum,” Weiss told The AJN.

“When I thought about how to best engage children as young as six with Holocaust history, my mind instantly wandered to Eddie Jaku’s words in his book.

“This was the perfect inspiration behind my piece, which teaches the children lessons of resilience, kindness and compassion. What better message to share in honour of Kristallnacht.”

The 45-minute commemoration will also feature four generations of the Jaku family – all of whom are involved in Holocaust remembrance activities – lighting candles in remembrance.

The commemoration begins at 7.30pm on Tuesday, November 9. Register at: nswjbd.org/kristallnacht.