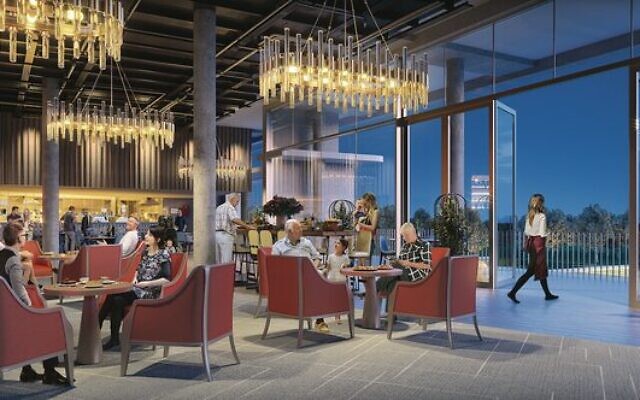 Artist's impression of the restaurant at the new Hakoah.

ROWING up not going to a Jewish school, feeling part of the community wasn’t always so easy. My parents were very involved, and so I knew a lot of the Jewish kids my age, but still I often had the feeling of being an outsider looking in – a guest in my own home – perennially unsure where to go and who to be.

Bar mitzvah season was tough. A mid-March morning in 2007 stands out as particularly memorable. Despite not having been asked for it, mum gave her strong recommendation that wearing anything less than a button down dress shirt to Jared Engelman’s brunchtime celebration would be wholly inappropriate. I still remember the tears and the angst as I implored her to see reason – the Moriah kids would all be in t-shirts and a button down would look silly. Unmoved by my protestations and assisted by reinforcements in the shape of an angry dad, mum got her way and I spent the car ride anxiously dreading the moment my state of overdress would be revealed to the world.

Fortunately, the impending humiliation I feared never eventuated. On the way in to the party we encountered the ever-stylish Jack Symonds who had donned a green and white button down for the occasion, seemingly designed with the express purpose of being recognisable from space. I would not be the only one.

I share this story because for me it encapsulates the desperate desire to fit in and the abject fear of standing out that characterised my experience growing up in our community. More than anything, I wanted to belong, to feel connected. But short of that, I just wanted to no longer be the weird kid from the weird school with no one to talk to.

In the years that followed, I built incredible friendships playing soccer with Maccabi and Hakoah FC, such that by the time I went to university I felt I’d found the connection I’d been yearning for. Yet I’m left to wonder, need it have taken that long?

One might argue the structure of our community is such that the Jewish schools must necessarily be the centre of the social universe for Jewish kids of school-age and that the disconnection experienced by those who attend school elsewhere is an unfortunate but inevitable by-product. This is no doubt true to some extent, but at a time when 60 per cent of primary-aged and 55 per cent of high school-aged Jewish children do not attend a Jewish day school, we need to ensure there are viable alternative avenues for those on the edges to find their place and feel a sense of belonging.

I believe that Hakoah at White City is a major piece of solving this puzzle.

We need a place that people can come to find one another. A place that serves as a home for Jewish life and way of life in all its many variations. If my experience teaches anything, it’s that it’s really hard for kids from the periphery to make friends in environments that are expressly social. It’s far easier to be brought together for some other purpose, say sport, or art, or music, with friendships forming as an organic by-product along the way.

Growing up not going to a Jewish school, feeling part of the community isn’t always so easy. I’m confident that Hakoah at White City might just change that and become our community’s melting pot.

Harrison Rosen is a recent university graduate and is working with the Hakoah team on their community campaign. He is also co-founder and director of Youth HEAR.