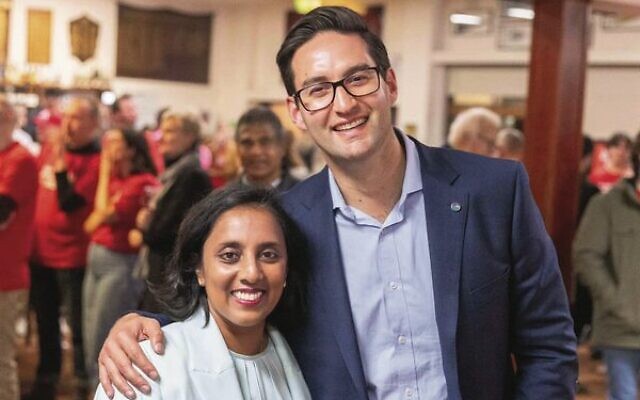 Josh Burns at his election-night party.

RED-clad ALP campaign workers and supporters crowded into Josh Burns’ Saturday night election-watch party for Macnamara, downing democracy burgers, as they followed TV screens with text switched on to be understood in the din.

At 8.30pm, there was tense anticipation – would the night be a redux of 2019, when an ALP surge failed to launch? Then just before 9pm, the ABC projected the Coalition had no route to majority government, and the mood lifted. Thunderous cheers punctuated the Middle Park Bowls Club, as Labor picked up seats and key Liberals went down or looked in trouble.

Just after 9.20pm, the ALP hit 70 seats – territory from which it was likely to form government. The redshirts went berserk. Even louder acclaim greeted news that the hoped-for Coalition wave from WA had not washed in. At 72, the ALP tally edged closer to a majority.

When Burns arrived around 9.30pm, the faithful lifted the roof off, feting the Jewish MP for Macnamara.

An upbeat Burns revved up the crowd like the warm-up gig at a stand-up club. Then he got serious. “It looks like the Morrison government is over … But this is a night where we need to dig deep, we need to listen to the Australian people.”

On his prospects for a second term, Burns was cautiously optimistic about his race against top challenger, Greens candidate Steph Hodgins-May, a third-time aspirant for the seat.

As The AJN went to press, Burns was ahead on preferences. Supporters said postal votes – of which a large chunk will have been from observant Jews who strongly skew to Burns – are more than likely to deliver the Macnamara MP.

“We’re hopeful. We’re not going to know for a little while,” Burns told The AJN.

Further down the bayside, Jewish MP Mark Dreyfus, a former attorney-general, increased his margin for a sixth term in Isaacs, and is in line for a ministerial role when caucus meets next Tuesday.

Dreyfus told The AJN, “I am delighted to be part of a government under Anthony Albanese, a prime minister who will bring the country together and lead a nation that is once more respected on the world stage … Just like every Labor prime minister before him, Anthony will be a friend and supporter of Israel and of peace in the Middle East.”