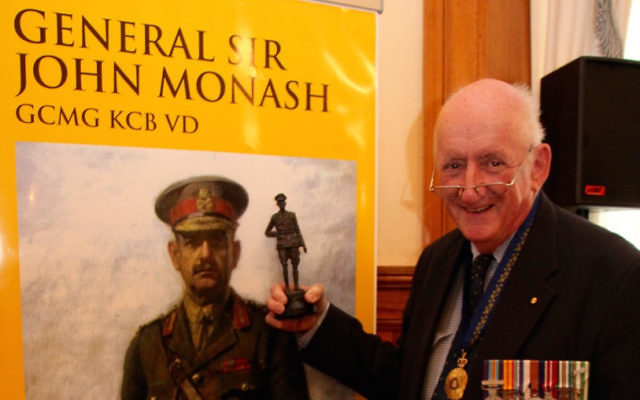 And Fischer, who is believed to have worked behind the scenes on the wording of the bill, told The AJN on Monday he hoped all candidates running for Wentworth would consider the merits of the bill, and indicate prior to Saturday what their position on Monash’s posthumous promotion is.

“I really hope they say they are in support of this long overdue, symbolic salute of tribute to Monash, and all who served in the AIF (Australian Imperial Force) in WWI – that is my challenge to them,” Fischer said.

The three main contenders in the by-election – Liberal candidate Dave Sharma, independent candidate
Dr Kerryn Phelps, and Labor’s candidate Tim Murray – responded to Fischer’s challenge on Tuesday, all putting their weight behind the bill in principle.

Sharma said: “Sir John Monash fits within the finest traditions of the Australian Jewish community. He made an immense contribution to Australia in both war and peace time, and left a lasting legacy of a stronger Australia.

“I would support his posthumous promotion, in recognition of his contribution to Australia’s wartime role and ultimate Allied success in World War I.”

Phelps told The AJN that she has decided to support her bill. “I understand this was instigated by Fischer because he believes a posthumous promotion of Monash to Field Marshal as a one-off event is extremely important to right a historic wrong – as he points out that one of the reasons Monash was not promoted at the time was because of prejudice, as Monash was Jewish,” Phelps said.

“So, if I’m elected this Saturday, I will vote in favour of McGowan’s private member’s bill, and I believe there is an expectation that it will be conducted as a conscience vote.”

Murray also committed himself to supporting the bill in Parliament, if elected.

“Sir John Monash is without doubt one of the greatest Australians – our most outstanding citizen soldier,” Murray said. “I would like to see him elevated to Field Marshal.”

Fischer added while the campaign by the Saluting Monash Council had suffered a blow last April “after [former PM Malcolm] Turnbull blocked it”, he remains hopeful the bill will be backed in Parliament.

“It’s time to correct this ahead of the centenary of the Armistice,” he said.