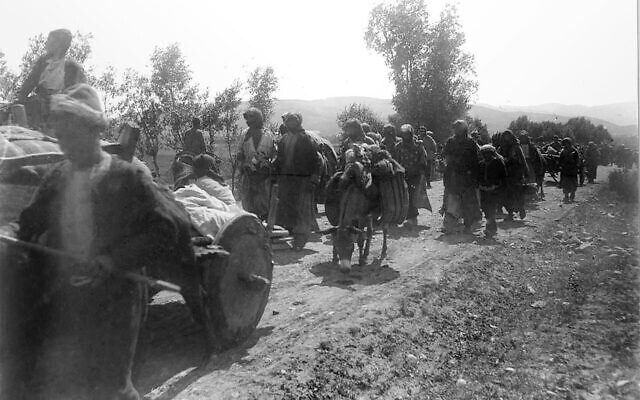 “I WOULD like to acknowledge just how much the Jewish community does for this cause – they have always delivered in helping us . . . [and] it’s sincerely appreciated,” executive director of the Armenian National Committee of Australia, Haig Kayserian, said with emotion at a particularly timely NSW Jewish Board of Deputies (JBOD) plenum on April 20.

Just five days later Joe Biden became the first US president to recognise the Armenian genocide – a significant development strongly welcomed by Australian Jewish leaders who are urging the Australian and Israeli governments to do the same – a motion was unanimously passed to reaffirm JBOD’s longstanding recognition of the Armenian, Assyrian and Greek genocides.

The motion also pledged full support of the Executive Council of Australian Jewry’s (ECAJ), “call upon all nations and governments to recognise the reality of these genocides”.

Following Biden’s announcement, Liberal Member for Berowra Julian Leeser told The AJN, “I have always been a supporter of Australia recognising the Armenian genocide, and while Australia will always make its own foreign policy decisions, I think it is very significant that our American allies have decided to recognise the Armenian genocide.”

Leeser, who was one of the first MPs to sign the Joint Justice Alliance’s 2020 Memorandum of Understanding that calls on the Australian government to recognise the genocides, also revealed, in a video message screened at the plenum, what drives his commitment.

“As a Jewish Australian, I don’t think I had another choice,” Leeser said.

“It was a genocide witnessed by journalists and by foreign officials at the time [1915-1923], and yet it has been a genocide that has been swept under the carpet.

“As Jews, we have a particular responsibility to call this out – the first genocide of the 20th Century – because it is to be remembered that the man that orchestrated the greatest genocide, against our people – Adolf Hitler – justified his actions by saying, and I quote: Who, after all, speaks today of the annihilation of the Armenians?”

Labor MP for Macnamara, Joe Burns, told The AJN on Wednesday, “The time for justice is now”.

Welcoming Biden’s move, he said, “They’ve acknowledged the true history and shown global leadership, together with 29 other nations which all recognise the genocide.”

He told The AJN on Tuesday, “It is our moral duty as Jews and as supporters of Israel to be tellers of truth in matters such as these”.

“As Israeli opposition leader Yair Lapid said, recognising the Armenian genocide is a moral issue, and should be divorced from strategic issues or the national interest.”

Speaking to The AJN, ECAJ co-CEO Peter Wertheim described America’s recognition of the Armenian genocide as being, “long overdue but nonetheless very welcome”, and labelled threats of retaliation by Turkey to nations including Australia, “if they dare to acknowledge the genocide” as “not the behaviour of a government that is confident it has truth on its side”.

“The mass killings of Armenians [and Assyrians and Greeks] by Ottoman forces was not merely a random by-product of World War One – it was officially ordered, organised and systematic.

“The evidence produced by historians is overwhelming.

“The Australian government will hopefully rethink its position in light of the US announcement.”

Earlier at the JBOD plenum, Wertheim said it is important to, “speak out and shine a light”.

“Because silence is a form of complicity – the longer it goes on, the more these sorts of atrocities proliferate.”

Expressing deep gratitude to Australian Jewry for its vital support, Assyrian-Australian activist and lawyer Suzy David – who has many extended family members who are generational survivors of the genocide – told the plenum, that an estimated 1.5 million Armenians, 750,000 Assyrians and 750,000 Greeks were slaughtered by the Ottomans in their ancestral homelands.

“By urging Australia to formally recognise this genocide, I extend, by pleading with our Jewish brothers and sisters, to endorse this demand – not only upon Australia, but also upon the State of Israel”.

During the plenum, JBOD CEO Vic Alhadeff revealed he had received a letter from the Turkish Consulate-General in Sydney days earlier, which expressed “deep disappointment and sorrow” about the plenum’s agenda, and even included a claim that “challenged the definition of genocide”.