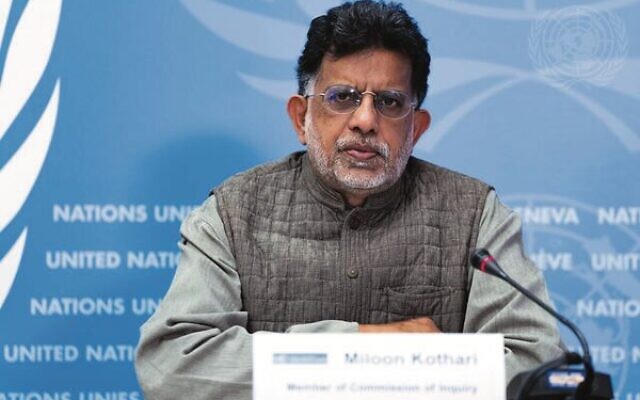 Australia has joined a chorus of nations to condemn antisemitic remarks made by a United Nations official that is investigating Israel.

Miloon Kothari, a member of the open-ended three-person UN commission of inquiry into last year’s 11-day fight between Israel and Hamas in Gaza said last week that the “Jewish lobby” was controlling social media and questioned why Israel is allowed to be a member of the UN.

Despite commission head Navi Pillay – who has in the past been accused of displaying “demonstrable bias” against Israel – claiming the comments were deliberately taken out of context, UN Human Rights Council president Federico Villegas called for a clarification on Friday.

Israeli Prime Minister Yair Lapid demanded the inquiry be disbanded, writing in a letter to UN Secretary-General Antonio Guterres, “The COI has been fundamentally tainted by the publicly expressed prejudices of its leadership, who do not meet the basic standards of neutrality, independence, and impartiality required by the United Nations.”

Australia’s ambassador to the UN Amanda Gorely joined her counterparts from the US, UK, Canada, Germany, France and other countries in condemning the remarks on Monday.

“Deeply concerned by recent comments made by @UN_HRC Israel Commission of Inquiry Commissioner Miloon Kothari. Antisemitism is unacceptable and we condemn it wherever it appears,” she said in a tweet.

Noting Australia had opposed the inquiry from the beginning, AIJAC executive director Colin Rubenstein said the government should call for “the whole unacceptable and unfair inquiry” to be disbanded.

Deeply concerned by recent comments made by @UN_HRC Israel Commission of Inquiry Commissioner Miloon Kothari. Anti Semitism is unacceptable and we condemn it wherever it appear.

“It is clear the problems with the inquiry are not limited to Kothari, but extend to the two other commissioners,” he said, noting Pillay’s defence of the remarks and comments made in June by fellow commissioner Chris Sidoti – an Australian – that “accusations of antisemitism are thrown around like rice at a wedding”.

“This commission of inquiry was never about finding facts or looking at solutions, but is the latest manifestation of the grossly politicised and destructive anti-Israel biases of the UN Human Rights Council, which has made bashing Israel a core part of virtually all its activities via the obviously discriminatory Agenda Item 7, which demands that the council debate and condemn Israel, and Israel alone, every time it meets,” Rubenstein said.

“This inquiry brings discredit on the UN, and damages both the cause of human rights and hopes for authentic Israeli–Palestinian reconciliation and peace as long as it exists.”

ZFA president Jeremy Leibler said Kothari’s comments were “as abhorrent as they are unsurprising” and endorsed Lapid’s call for Guterres to disband the inquiry.

“The UN Human Rights Council machine is constantly trying to outdo itself in its obsession with Israel. It was all but inevitable that the majority of the people it appointed to investigate Israel would reveal their animus towards Jews and Israel,” he said.

ECAJ co-CEO Peter Wertheim said Kothari “would be well advised” to study carefully the UN’s report on antisemitism in 2019 which concluded, “Assertions that … Jews constitute a “powerful, global cabal” that manipulates governments, the media, banks, the entertainment industry and other institutions for malevolent purposes, are also expressions of antisemitic attitudes.”

“This is a case of one UN functionary, Miloon Kothari, … undermining the work of another, namely Ahmed Shaheed, the UN’s Special Rapporteur on freedom of religion or belief,” Wertheim said.

“This is much worse than a waste of member states’ money. Kothari’s comments have highlighted how deeply tainted by bias the special commission and the Human Rights Council really are.”