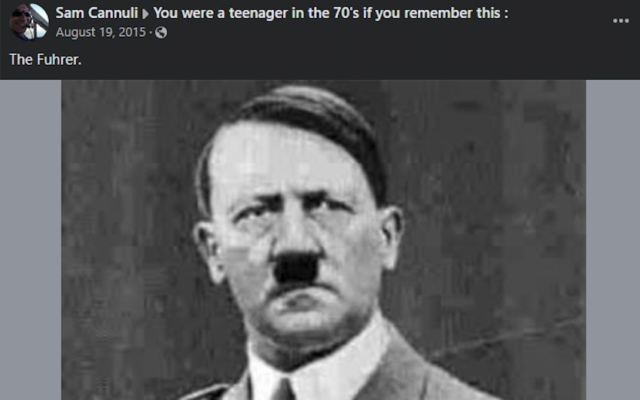 The Shooters, Fishers and Farmers Party has expelled a former candidate who told a parliamentary inquiry that “political party slogans and how-to-vote billboards are far more offensive than Nazi party slogans and posters”.

In his submission last December to the committee looking into the Crimes Amendment (Display of Nazi Symbols) Bill, Sam Cannuli also wrote, “The Nazi party is a part of history and you cannot ignore history. To ignore history is foolish and discriminatory as well as a form of censorship.

“There are far more important issues to resolve than wasting taxpayers money on frivalous [sic] nonsense. Wake up and be responsible.”

In 2015, Cannuli also posted a photo of Adolf Hitler to a Facebook page called “You were a teenager in the 70’s if you remember this” with the caption “The Fuhrer”.

Underneath, he commented, “Hitler knows talent.”

Shooters, Fishers and Farmers leader Robert Borsak told The AJN on Tuesday, “Pro Nazi opinions expressed by Sam Cannuli are not those of the party, never have been and never will be.

“Mr Cannuli has been expelled from the party, as the Shooters Fishers and Farmers party will not be associated in any way with pro-Nazi propaganda.”

NSW Jewish Board of Deputies CEO Darren Bark said Cannuli’s comments and social media posts “are exactly why we need this type of legislation”.

“This is not censorship. It is not ignoring history. Legislation like this will ensure we do not forget the lessons of history, and how they can be used to bring out the worst in our society,” he said.

A grandson of Holocaust survivors spotted the items for sale at Dirty Janes last week.

“White supremacists are nourished by these cursed, blood-stained items and use them to recruit new members to their dangerous cause,” Abramovich said.

“Antisemitic propaganda, as represented by these items, often results in violence and deadly attacks, and as we monitor the growing threat of extremist organisations, we know that such groups have an appetite for these satanic relics.

“This lurid trade has to stop.”