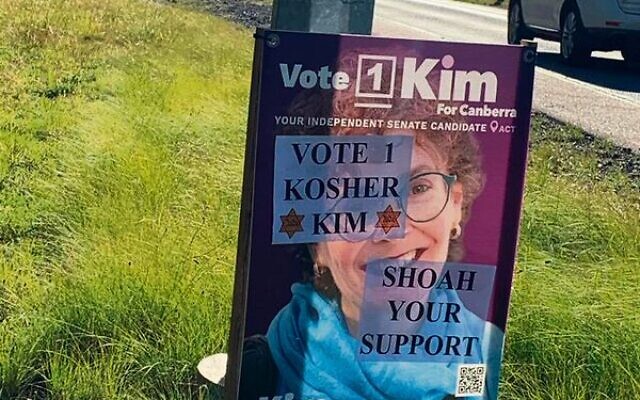 Independent Jewish Senate candidate Kim Rubenstein has declared, “Our multicultural democracy is only as strong as its defenders,” after she found election signage vandalised with large stickers containing antisemitic slurs.

One sticker, found on signage in the ACT where she is running as a candidate, read “Vote 1 Kosher Kim” with two yellow stars, while the other said “Shoah your support”.

While she said it was “hurtful to see”, Rubenstein said, “I’ve got a pretty thick skin and was warned this could happen.

“We must be vigilant against any behaviour that seeks to vilify people for their religion, race, ethnicity, gender or sexuality,” she said.

“I will always defend freedom of speech and people’s right to their own opinion. But free speech can’t be a free pass for hatred.”

Rubenstein said we can disagree “without harming or belittling each other, and we can have our say without racist, bigoted attacks”.

“We should also be able to make our points without resorting to misinformation and misleading political advertising – something we’ve seen far too much of already this election campaign,” she said.

Also in the ACT, Informed Medical Options Party candidate Michael Simms had his poster plastered with the Nazi “Sonnenrad” symbol.

Executive Council of Australian Jewry co-CEO Peter Wertheim said of both instances of graffiti, “It goes to show that antisemites can come from any part of the political spectrum.

“The individuals who resort to these tactics demean our democracy and show themselves to be cowards who cannot face others in open political debate.

“Instead, they take refuge behind anonymous, antisemitic bullying and harassment. This is a relatively new, and utterly loathsome, intrusion into the political process.”

Meanwhile, last week the Liberal candidate for Dunkley in Victoria, Sharn Coombes, also had her poster defaced with the Nazi swastika.