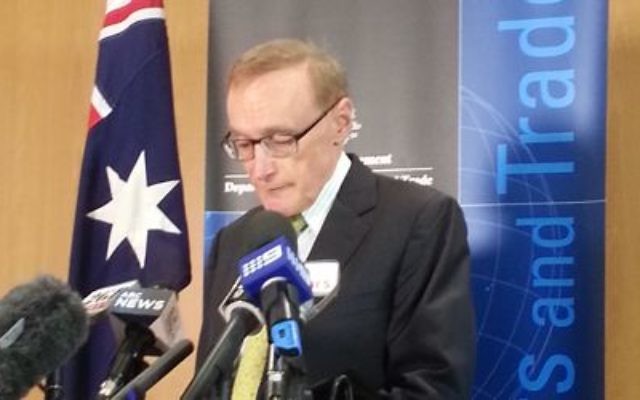 FOREIGN Minister Bob Carr was condemned by communal leaders this week for claiming that the federal Labor government views all Israeli settlements as illegal.

Speaking at a commemoration of Eid al-Fitr, the end of the Muslim month of Ramadan, at Lakemba Mosque in Sydney, Carr said: “All settlements on Palestinian land are illegal under international law and should cease. That is the position of Kevin Rudd, the position of the federal Labor government and we don’t make apologies for it.”

“At a time when political leaders around the world should be doing everything they can to encourage both the Israelis and the Palestinians to negotiate without any preconditions or pressures, we do not believe that the Foreign Minister’s comments are helpful,” he said.

In defence of Carr’s position, a Department of Foreign Affairs and Trade (DFAT) spokesperson has alleged that Israeli settlement activity is a violation of the Fourth Geneva Convention, and the applicability of the convention to the “Occupied Palestinian Territories” was reaffirmed in the yearly vote in the United Nations General Assembly last November.

But both the Australia/Israel & Jewish Affairs Council (AIJAC) and the Executive Council of Australian Jewry (ECAJ) have rebutted this explanation.

“A strong case can be made that the Fourth Geneva Convention does not apply in the West Bank and, even if it does, that it would not forbid Israeli settlements there,” AIJAC executive director Colin Rubenstein said.

“We are disappointed that Senator Carr has altered a longstanding bipartisan policy in Australia by repeatedly asserting a contentious and disputed legal claim, in a way which is both one-sided and which also potentially undermines progress towards a ­negotiated two-state resolution to the conflict.

“Unequivocal proclamations on contentious legal claims prejudice the outcome of negotiations by narrowing the scope for compromise on important final-status issues.”

Writing in a column in today’s AJN, ECAJ executive director Peter Wertheim said: “One would not have expected a senior and respected Foreign Minister to make so basic an error as to treat all the settlements alike when commenting on their international legality.

“Our Foreign Minister would have done better to limit himself to well-established bipartisan principles calling for a peaceful settlement of the conflict based on ‘two states for two peoples’.”

“The Coalition … in the absence of any agreed view in international law, does not pass judgment, in recognition of the hotly disputed nature of the opposing arguments,” she said.