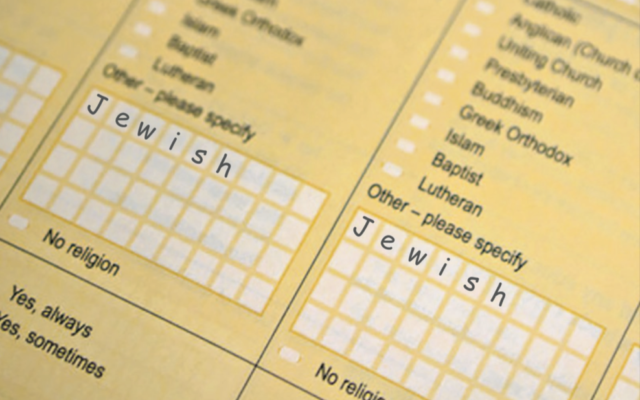 The number of Jews on the Australian census has dropped.

THE number of Jewish people in Australia has dropped by more than six per cent in the last five years, according to Census data released this week.

Statisticians have been left scratching their heads, and they have questioned the accuracy of the figures as it is the first time in more than 30 years that the number of people who have identified themselves as Jewish has decreased.

Dr David Graham from the JCA in Sydney said that more analysis would need to be undertaken, but suggested the negative publicity in relation to privacy of Census data and the failure of the Census website may have led to fewer people filling out the Census, and/or fewer people stating their religion.

“The Australian census figure of 91,022 Jews for 2016 is demographically implausible,” Graham said.

“Projected changes in Jewish migration, births and deaths from 2011 together pointed to a net increase in the size of the community, as has been the case in every census over the last 35 years.”

Graham said that if the numbers are accurate, then the drop of 6305 Jews would represent by far the largest single contraction of Australian Jewry in the 105-year history of commonwealth census-taking, with one exception, 1976.

“Tellingly, that census was plagued by adverse publicity and concerns about privacy.

“And at first glance, it does unfortunately appear that negative publicity in the run up to the 2016 census, as well as the debacle that took place on census night in the form of online sabotage, may well have dissuaded a significant number of Jewish people in our community from reporting Jewish in the 2016 census question on religion, in contrast to previous censuses.”

He said the census has been a major asset in the community for decades, but poor census data can only be detrimental to communal planning and service provision going forward.

“In the coming weeks and months, we will be examining this data in detail to establish which sub-groups were most likely to have been underrepresented.

“In addition, we have tremendous data from Gen17, the national Jewish population survey, which will also be examined for clues in assessing the credibility of the 2016 census with respect to the Jewish population.”