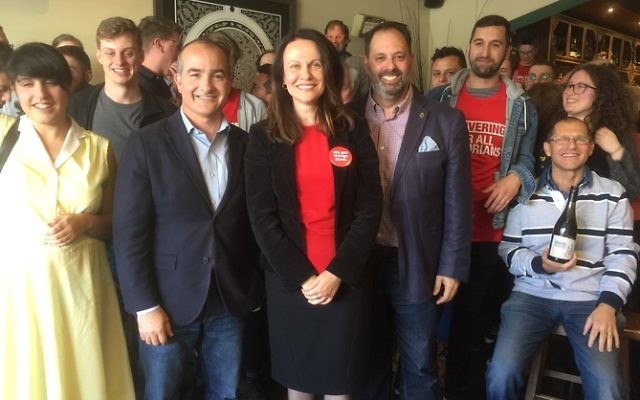 TWO Labor ministers — one them Victoria’s Deputy Premier — were on hand to launch the campaign of Caulfield’s ALP candidate Sorina Grasso.

She is the latest in a line-up of Jewish challengers for Caulfield, including Josh Burns (now the candidate for the federal seat of Macnamara) in 2014, Heather Abramson in 2010 and Harry Simon in 1999 and 2002.

Grasso was introduced by Trade and Investment Minister Philip Dalidakis, who paid tribute to earlier ALP challengers for the seat “have walked up and down the bagel belt, to get Sorina in a position where she is within striking distance”.

Dalidakis, who is also the Minister for the Digital Economy and Small Business, and MLC for Southern Metropolitan Region, was master of ceremonies at the launch event which saw ALP faithful converge on Balaclava to pack into an informal Carlisle Street bar that was still buzzing from the government’s main election campaign launch earlier that day.

Grasso, a trained educator who grew up in Israel and in Caulfield, emphasised the Andrews government’s education policy in her launch speech.

Lauding Premier Daniel Andrews’ support for the Jewish community, she detailed the government’s $4 million security funding grant, a $500,000 grant for the Jewish Cultural and Arts Precinct and a further $1 million if reelected, adding that “our Premier’s a true friend and puts his money where his mouth is”.
Like Dalidakis, Deputy Premier and Education Minister James Merlino headed to Grasso’s launch directly from the state campaign launch.

Merlino recalled his 2013 visit to Israel, which he said has been a great source of ideas for Victoria’s education policies.

Turning to funding, he stated, “I want to say a few things about what we’ve delivered and what we are promising — $1 million in infrastructure for a number of projects including the Jewish Holocaust Centre, the Jewish Museum and the Caulfield Shule … $3 million [delivered in the last state budget] making our Jewish community centres safer … $500,000 for the Jewish Cultural and Arts Precinct, and one of the promises we’ve made is that a reelected Andrews Labor government will deliver a further $1 million to that cultural and arts precinct.”

Briefly punctuating the upbeat atmosphere at the launch was a silent reflection called by Dalidakis to remember the victims of the Pittsburgh synagogue shooting.