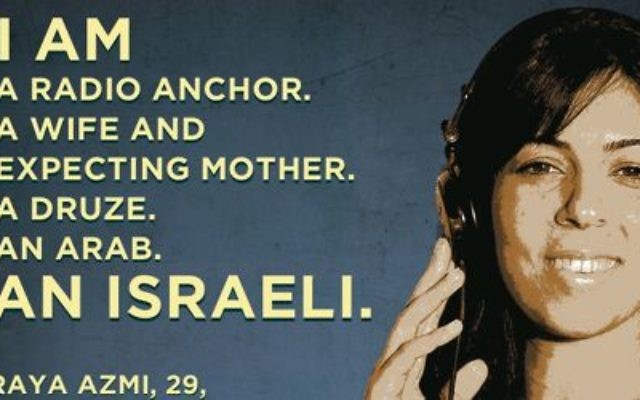 PHILLIP Salvador, 24, is a Catholic scout leader and Israeli Air Force veteran. Salma Aboganem, 55, is a Muslim bedouin and former Israeli Defence Forces veteran. Rani Sneh, 25, is a gay Jewish student living in Israel. They may not be household names, but their stories are the focus of a new campaign by the Australasian Union of Jewish Students (AUJS), designed to educate tertiary students about the real Israel.

Launched by former Soviet refusenik, Israeli Minister of State and Jewish Agency chair Natan Sharansky at Melbourne’s Beth Weizmann Community Centre early this week, the campaign, called “I am an Israeli”, will showcase Israel’s diverse society, by highlighting the stories of 10 Israelis, including an Ethiopian doctor, a Druze radio anchor and a social activist lawyer.

AUJS’ bid to inject a dose of positivity about Israel on campus, comes just weeks after a spate of anti-Semitic and anti-Zionist incidents plagued three university campuses during O-Week, prompting condemnation from Education Minister Christopher Pyne.

The incidents at the Australian National University (ANU), the University of New South Wales (UNSW) and the University of Adelaide, involved anti-Semitic graffiti, the harassment of two Jewish individuals at the UNSW, allegedly by the far-left group the Socialist Alternative, and other anti-Zionist activity.

AUJS’ political affairs director Matthew Lesh said the campaign’s launch was not in direct response to the recent vilification, as the union started working on this initiative late last year. However, it is hoped that in addition to achieving the primary goal of introducing a positive discourse about Israel, that AUJS’ campaign would “respond to recent issues on ­campus”.

“We are hoping to provide a different view of Israel on campus. There is a lot of material on Israel from the Socialist Alternative and Students of Palestine which is all very negative and lacking any factual basis,” Lesh said.

The campaign has also been launched online and is quickly gaining traction on social media, with the campaign’s material on AUJS’ Facebook page yielding nearly 14,000 views and more than 40 ‘likes’ on the day of its launch.

Over the next few weeks, AUJS will also invite Israeli speakers such as Israel’s Likud-Beitenu coalition chairman Yariv Levin to universities, as well as establish stalls and events that celebrate Israel.

Check out AUJS’ campaign at: www.iamanisraeli.me.