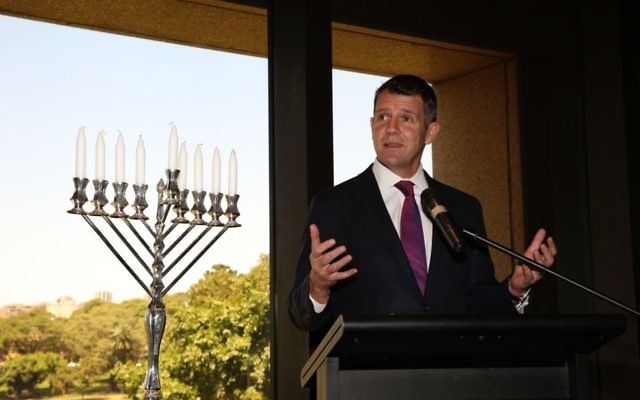 CHANUKAH came early at Parliament House last week, with the who’s who of the community gathering for a pre-Chanukah celebration.

The event saw MPs from both sides of politics, including NSW Premier Mike Baird and Opposition Leader Luke Foley, join rabbis and communal leaders for doughnuts, blessings and the lighting of the chanukiah.

“There is a Jewish saying which I think is very pertinent right now, and that is ‘A little light expels a lot of darkness.’ Those words are very powerful,” Baird said.

Stating that the Jewish community “knows pain that words can’t begin to put together in terms of how deep and how profound it has been”, the Premier said it has, at the same time, “inspired the world with its resilience and its strength, in light of that pain and those atrocities, and right now the world, in many respects, has broken hearts from one end of the globe to the other”.

“Yes there is darkness, but in light, darkness does not overcome. As we think of that in terms of the festival of lights, it is such a perfect time to have this festival,” Baird said.

“When all things seem hopeless and dark, that actually while our hearts are broken, we’re united because our spirits are not quenched.

“There is a sprit across the world that says we are stronger together, we can stand against these atrocities together, and together, we will defeat them.”

Minister for Multiculturalism John Ajaka, Foley and NSW Jewish Board of Deputies president Jeremy Spinak also spoke at the function, while Member for Coogee Bruce Notley-Smith emceed the event.