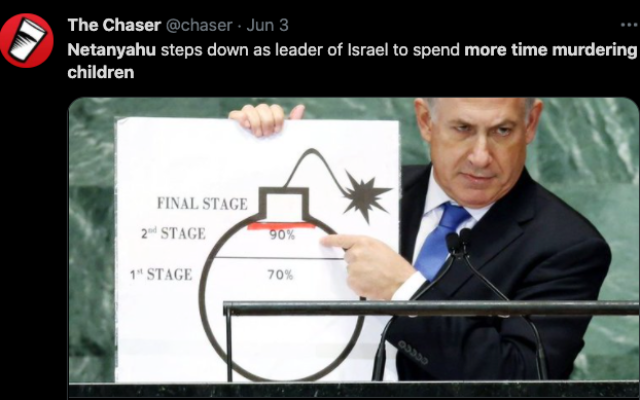 SATIRICAL website The Chaser has come under fire for a series of anti-Israel articles, the most recent of which was entitled “Netanyahu steps down as leader of Israel to spend more time murdering children”.

The article calls the IDF a “terrorist cell”, Netanyahu a “racist baby-murderer” and quips, “Gal Gadot has already begun work on a new ‘Imagine’ video in order to help keep spirits high amongst IDF soldiers who otherwise might not feel like committing baby-slaughter today.”

“While the ADC is willing to give comedians leeway in pushing the envelope, by using such slurs and canards to demonise Israel as inhuman and monstrous, The Chaser has played into antisemitic tropes and conspiracies,” he said.

“Words have consequences, and this dangerous incitement puts Jews at risk, especially at a time when antisemitic incidents are at an all-time high.

“To state that Israel purposefully and maliciously targets children … is the contemporary incarnation of classic blood libels that accused Jews of killing Christian children to use their blood in religious rituals,” he continued.

“There is no satire here, only promoting hatred and letting Hamas, which uses Palestinian children as human shields, off the hook.”

Executive Council of Australian Jewry co-CEO Alex Ryvchin said, “Clearly the writer had nothing funny or smart to write and tried to mask his deficiencies by creating some racist clickbait.

“He’ll get some ‘likes’ on social media where anything that mocks Jews is cheered and then he’ll slip back into insignificance,” he said.

“He should use his quiet time to read up on the blood libel which has resulted in massacres of Jews based on the same lies the writer uses, only with greater originality and command of language.”

The AJN contacted The Chaser this week for a comment addressing the blood libel. A writer who was not involved in the articles replied, “If you can suggest a preferred phrasing that would avoid the imputation, we’d be open to amend the article.”

The AJN explained the entire article was the issue and again requested a comment, but a response was not received by press time.