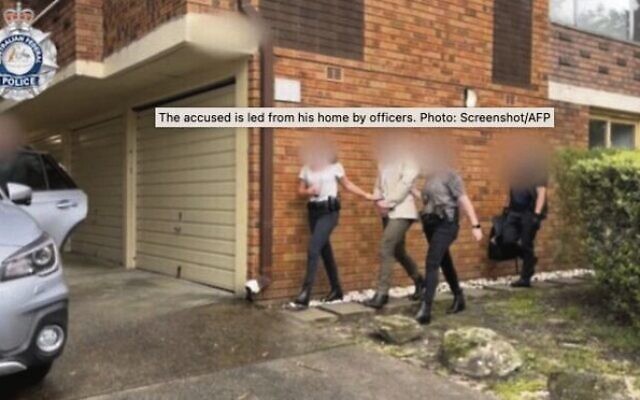 Cody Reynolds was arrested outside his Kensington home in March. Photo: Screenshot/AFP

The 36-year-old will be sentenced in February next year after he faced Sydney’s Downing Centre Local Court on Tuesday morning, where his lawyer entered pleas of guilty on behalf of his client to possessing or controlling child abuse material obtained or accessed using a carriage service, and using a carriage service to transmit, make available, publish, distribute or promote child abuse material.

Reynolds was arrested and charged outside of his Kensington home in March and his employment at Moriah College was immediately terminated. There is no suggestion that any of the alleged offences occurred on school grounds or that any of the charges relate to online or in person contact with Moriah students.

Reynolds began teaching at the school at the beginning of 2021, having previously worked at Christian Brothers’ High School, Lewisham, the Scots College and Waverley College.

At the time of his arrest, Moriah sent a letter to parents stating Reynolds had been “recruited in line with our stringent employment policy, which includes thorough referencing and child safety vetting”.

At his March court appearance magistrate John Favretto noted Reynolds was allegedly in possession of a “considerable amount” of images and videos “involving a large amount of prepubescent children, some still in their infant years”. But he said there was no evidence Reynolds had had physical contact with children or had planned to do so.

The court was also told Reynolds had a valid Working with Children Check.

Reynolds remains on bail and will be sentenced in the District Court on February 3.