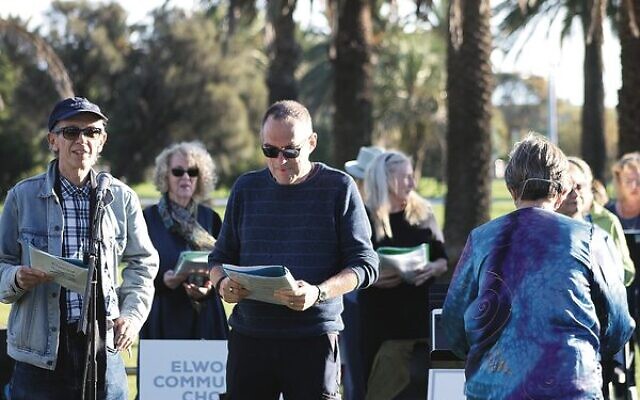 AS a stream of European migrants found a home in Melbourne after World War II, Les Haberfield and his parents – both Holocaust survivors – settled in St Kilda, joining many other Eastern Europeans who also settled in the south-east.

Haberfield recalls many Sunday morning walks down Acland Street as a child, listening to his father conversing gregariously in Yiddish with a seemingly endless string of friends and acquaintances in the street and seated in cafes.

During his early childhood in the 1950s, Haberfield’s parents ran a milk bar in Acland Street, before operating a delicatessen in Carlisle Street, Balaclava.

He remembers Acland Street and its neighbours as social “magnets” for Jewish migrants in the 1960s and 1970s, noting the wave of immigration from Russia as Jewish citizens and “refuseniks” escaped the Soviet Union.

As a 15-year-old in 1970, Haberfield, who had developed a love for music, said he first heard the song Tum Balalaika when Greek singer Nana Mouskouri sang her hit song Over and Over to the tune of the popular Yiddish track.

“My father heard it and he told me that Tum Balalaika was the favourite song of his childhood in the 1930s in happier times before the onset of the horrors of World War II,” Haberfield told The AJN.

Earlier this year, Haberfield sang this song with the Elwood Community Choir as a participant on a cultural walk and singalong organised by the Elwood Singing Walking Trail.

The community choir has seven Jewish members who were excited to be able to sing a song with such strong ties to their heritage. The song, which has since also been adapted for Russian audiences, translates from tum to ‘noise,’ while a balalaika is a classic Russian folk instrument.

The song is about a young boy pondering love and whom he shall give his love to and be worthy of. He is flirting with a girl by saying riddles to her to see if she is “the one”.

“He is not flirting with her by being sensually or sexually provocative, or flattering her vanity,” Haberfield explained. “He is testing her mettle by intellectually toying with her.”

Analysing the lyrics of the song, Haberfield came to the conclusion that because “Jews are a cerebral people with a long respect and tradition of intellectual debate,” the song was a reflection of the religious training in traditional Orthodox communities of Eastern Europe where analysis and discourse of the words and meaning of the Talmud were highly valued.

“Our young boy in the song is testing the worthiness of a potential partner in intellectual play,” the St Kilda local explained.

Haberfield said it was not clear when and where the song originated, but noted that Melbourne Jewish historian and scholar Bernard Rechter believes it originated in Lithuania and gained currency through a “fluid” Jewish Lithuanian community.

In search for the perfect Jewish song for the cultural walk, organiser Jeannie Marsh, who formed the Elwood Community Choir in 2016, said she had contacted local Yiddish expert and performer Tomi Kalinski for advice.

“She suggested Tum Balalaika and I was thrilled with this choice,” said Marsh.

“It is a fabulous, rollicking waltz tune, great fun for dancing and singing with all the family.

“Choosing the Yiddish version was a great way to honour the history of Yiddish-speaking migrants who settled in Elwood.”

Remembering back to his “kind and beautiful father” Chunek Haberfield, who passed in 1998, Haberfield said, “I sing this song for you.”

The choir is accessible to all, noted Marsh, encouraging community members to get involved.