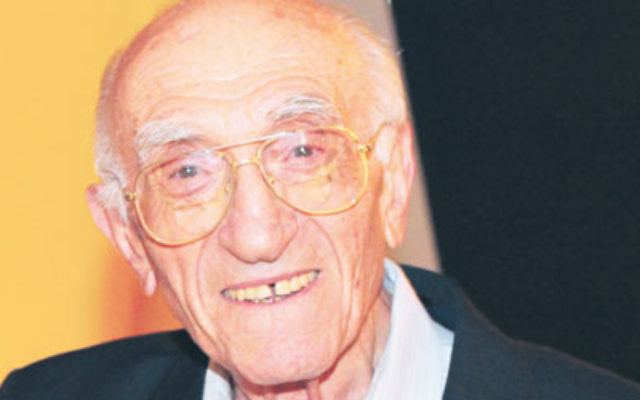 WHEN eminent Melbourne scholar Israel Kipen wrote Ahad Ha-am: The Zionism of the Future in 1997, it soon became the definitive study of one of Zionism’s most influential figures, Hebrew essayist Asher Ginsberg (pen name Ahad Ha-am).

It became a prescribed text at the University of Melbourne’s Centre for Jewish Studies and History and at the Hebrew University in Jerusalem.

Now the book has been republished as an e-book, and 94-year-old Kipen has written a new introduction for the classic text.

He wants young readers to gain an insight into the “intellectual maelstrom of 19th and 20th-century Jewry apart from Hitler and Stalin, and to understand our own crossroads”.

“I hope it will serve as a modern Guide for the Perplexed on Zionism and reach a new audience.”

Kipen, a community stalwart and former president of the State Zionist Council of Victoria in the 1950s, received an honorary doctor of letters from the University of Melbourne for his contribution to Jewish studies and community life.

He came up with the idea for the book while he was lecturing on Ahad Ha-am at the University of Melbourne in the 1980s.

“I realised that there was not a single book in the English language that explained, in the most elementary way, Ahad Ha-am’s philosophy and writings, and which could make a student understand what Ahad Ha-am was all about,” he says.

“I did not expect the reaction that it got at the time – it was in universities and libraries in many countries.”

Kipen’s admiration for Ahad Ha-am began more than 80 years ago.

“I was impressed with Ahad Ha-am when I first studied his essays in high school,” says Kipen, who was born in Bialystok in Poland in 1919 and survived World War II in Shanghai until 1946, when he settled in Melbourne and established a successful knitwear manufacturing business. He helped establish Mount Scopus Memorial College and Bialik College and become heavily involved in communal activities.

“I was taken by the clarity of Ahad Ha-am’s writing, the conciseness of his argument and his objective, detached reasoning about the Jewish situation,” he recalls.

“I carried his thoughts within me throughout all my travails.”

Kipen hopes that the e-book will reach the widest possible audience and continue to have a major impact.

In the preface to the new version of Ahad Ha-am, Dr Dvir Abramovich, director of Hebrew and Jewish studies at the University of Melbourne, writes: “Kipen’s knowledge across the periods and themes is formidable. His writing is beautifully clear and his conclusions always compelling. This is historical and literary scholarship at its finest and a joy to behold.”

Kipen is thrilled that the new version of his book has been published, although he admits that he will not be reading it online as he does not use a computer or a tablet.

Ahad Ha-am: The Zionism of the Future is published by Hybrid Publishers and is available from Amazon for $9.99 (rrp).