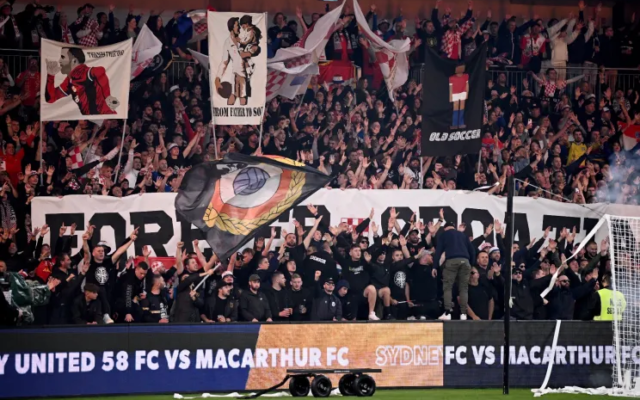 SOCCER club Sydney United 58 will be required to undertake volunteer work with Jewish communities and education to counter antisemitism after being handed down heavy sanctions for its fans’ behaviour at the Australia Cup final.

Football Australia (FA) issued the club with a $15,000 fine, as well as several suspended sanctions over the next three years, after fans were caught performing Nazi salutes during the match against Macarthur FC early last month. Two individuals have already received life bans from attending any official FA matches.

Australia’s football governing body met directly with the NSW Jewish Board of Deputies (JBD), who were instrumental in arranging Sydney United undertake ongoing volunteer work with Jewish and First Nations communities, as well as compulsory education for the club’s board, players, support staff, volunteers and fan group leaders to counter racism, discrimination, antisemitism and other faith-based hatred.

NSW JBD CEO Darren Bark said the displays at the Australia Cup final “were some of the ugliest scenes we have seen by spectators at a football game in our country”.

“The response by Football Australia to these deplorable incidents is to be commended. We hope the sanctions issued to Sydney United will act as a warning to other clubs that racist behaviour of any kind will not be tolerated,” Bark said.

“Fighting hate is everyone’s responsibility. The NSW Jewish Board of Deputies is proud to work with Football Australia and Sydney United on programs to counter antisemitism and other forms of discrimination.

“We look forward to the club giving back to the community. As role models, it is incumbent on the players to take the lead in displaying mutual respect, understanding and acceptance on and off the field.”

The $15,000 fine is payable immediately, while further suspended sanctions will be triggered if Sydney United fails to comply with specific requirements over the next three years.

“What has strongly resonated is the deep hurt and impact of the actions that do not represent the values and expectations of our game or protect our community.

“The actions of certain groups of people were disrespectful and deeply offensive to the Indigenous Australian and Jewish communities. Through our consultation it has once again been evident the leadership role football can play in relation to societal and systemic issues like discrimination.”