“I DIDN’T choose who I love, but I chose who I am … and I don’t want to let that go,” Melbourne-based Jewish gay man Jarod Rhine-Davis said with pride upon receiving the B’nai B’rith Young Leadership Award last December.

After “taking a break from religion” for years while struggling – like many others before him – with reconciling his Jewish and LGBTQI+ identities, and navigating through societal pressures to hide from one or the other, Jarod experienced a turning point in 2019.

He participated in a Jewish queer youth leadership program in Argentina run by JDC Entwine and JQ International, where the group shared their experiences, and “embraced every piece of ourselves”.

“We sang the beautiful, wistful Havdalah tune in one united voice, and at that moment, I’d never felt more Jewish, or more at peace.”

Jarod returned “finally feeling whole, or close enough” and, with renewed energy, launched Jewmos – a group aiming to repair relationships between the queer and Jewish communities.

And he has certainly been busy in the last 12 months, as he strives to build cross-community bridges.

Appearing as a guest on SBS TV’s Insight episode, Coming Out With Faith, Jarod has also spoken at Progressive and Orthodox shules in Sydney and Melbourne, addressed Limmud Oz, the queer media, and participated in online webinars with several Orthodox rabbis.

"I wanted to be the best Jew that I could."Jarod reflects on being gay and a practicing Jew. Watch Coming Out With Faith Tuesday, 8:30pm.

Packs containing traditional foods, ritual items and meaningful guide booklets are posted for free to LGBTQI+ people who want to reconnect with the Jewish festivals of Purim, Pesach, Shavuot, Rosh Hashanah and Chanukah.

Jarod, who is self-funding the project but encouraging donations, was busy preparing Purim packages ahead of the festival which starts on the night of February 25 when he told The AJN the project is particularly designed to cater to the needs of “queer people living in the Jewish closet”.

“By that, I’m referring to queer people who have felt burnt by Judaism through negative experiences, so they’ve thrown away that part of themselves and dived off into the queer secular world – which is wonderful. But through my own conversations, I’ve discovered there are many who, despite everything they’ve been through, still have a desire to find even a fragment of Judaism to hold onto, but they often just don’t know how.”

Another common underlying pressure factor, Jarod explained, is that “the broader queer community can sometimes be anti-religious – and it can be specifically difficult for a queer Jewish person due to pro-Palestinian sentiment too”.

“So what we do with the care packages, and in our virtual Pride Shabbats, is provide resources that explain the rituals, and then invite participants to find meanings in a way that resonates with them.

“With candle lighting, for example, as both Jews and as queer people we can appreciate the lightness and the darkness, as both of our communities have been through moments of trauma and discrimination, but we’ve also both had incredible triumphs and shown resilience.” 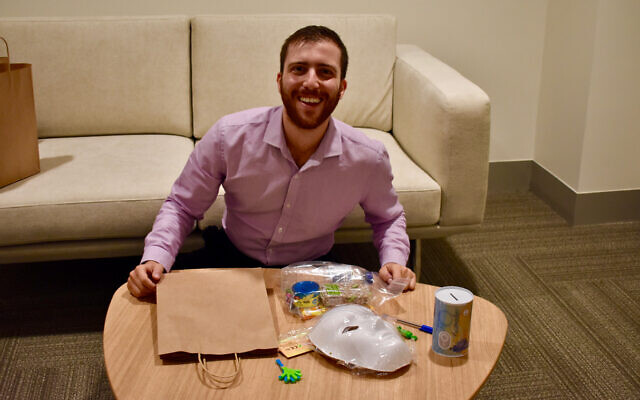 Jarod with one of the Jewmos Purim care packages.

As Jewmos’ online activities increase, so does their reach to help others.

Miriam Marling, a Canadian queer Jewish woman, told Jarod she’d felt locked out of Judaism for over a decade, but participating in virtual Pride Shabbats helped her feel empowered to return – an experience she wrote about in queer magazine Archer.

Jarod also expends a lot of time and energy – despite it being a far from easy task due to the complex interface between homosexuality and traditional Jewish law – creating opportunities for dialogue with rabbis from Orthodox shules.

He believes the warm, inclusive embrace of LGBTQI+ people by progressive shules for many years now is very important to queer Jewry, yet from his own personal perspective, “It’s not the Judaism I grew up with … so wouldn’t it be great to be able to find that within Orthodox Judaism?”

Jarod adds that while things are improving in that area, and more Orthodox rabbis are genuinely reaching out to discuss how their shules can feel more welcoming and safe for queer Jews, “there is always an asterisk attached … a feeling of being accepted and embraced – up to a point”.

“I know that, at the end of the day, Orthodox rabbis have a responsibility to uphold the scriptures.

“If there was a simple answer, then we wouldn’t need to be doing this interview!

“So, for me, the aim is always about achieving more mutual understanding, because it is impossible to hate someone if you understand them.”

One aspect of Jewmos’ care packages for Purim that gives Jarod “a lot of hope” is the fact that one Orthodox rabbi has reviewed the guide booklets in the packs to ensure their content is correct, another has kindly supplied hamantaschen, and a third has actually donated to the project.

For more information or to donate to Jewmos’ Care Packages project, visit bit.ly/JewmosDonate.