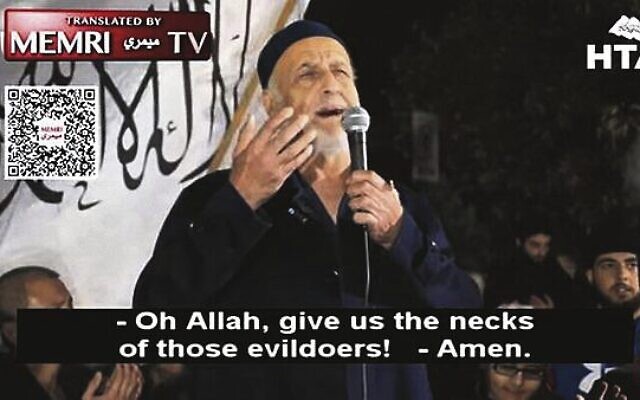 A screenshot from the video, translated by MEMRI.

FEDERAL Liberal MP Dave Sharma has written to Attorney-General Michaelia Cash calling for the leaders of Hizb ut-Tahrir Australia to be charged with using a carriage service to menace, harass or cause offence to the Jewish community.

Sharma’s letter was in response to a rally by Hizb ut-Tahrir which took place in Sydney in May, in which the crowd chanted “Destroy the Jews!” and “Oh Allah, give us the necks of those evildoers”.

Footage of the rally was uploaded to YouTube by “Hizb Media”. The offence of using a carriage service to menace, harass, or cause offence carries a maximum penalty of three years’ imprisonment.

“Members of the Jewish community in my electorate of Wentworth were shocked and appalled by these remarks, and felt highly offended and harassed,” Sharma wrote.

Noting he has written to Home Affairs Minister Karen Andrews “asking that she consider whether Hizb ut-Tahrir should be designated as a terrorist group in Australia, as it is in a number of other countries”, Sharma added, “The remarks at this rally confirm a pattern of behaviour by this group, which has frequently vilified and sought to intimidate the Australian Jewish community in this way.”

NSW Police Force Counter Terrorism and Special Tactics commander, Assistant Commissioner Mark Walton, said in October that the video had been referred to the terrorism intelligence unit for assessment. “It’s subsequently been allocated to the Fixated Persons Unit for investigation,” he said in response to questioning by Shadow Minister for Police and Counter Terrorism, Walt Secord.

He added that Muslim community members “have denounced” the rally and Hizb ut-Tahrir was “not well regarded” by the mainstream Islamic leadership.

Meanwhile, in a letter to Vaucluse MP Gabrielle Upton late last month, Attorney-General Mark Speakman condemned the contents of the video, saying “Antisemitism has no place in our society. Hate speech of any kind is abhorrent and stands contrary to the fundamental values of tolerance and equality that underpin our vibrant multicultural community.”