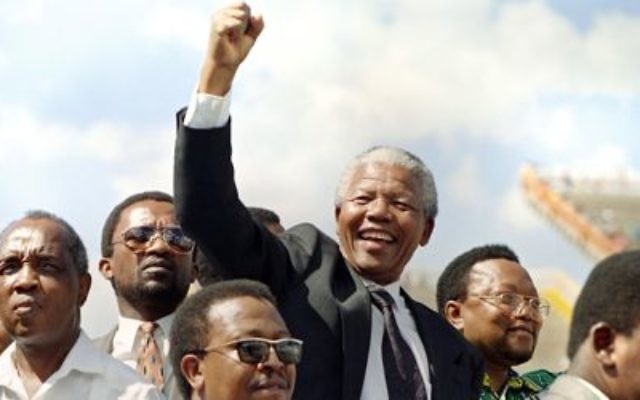 JEWISH communal leaders have added their voices to the worldwide flood of tributes for anti-apartheid hero Nelson Mandela.

South Africa’s first black president passed away last Friday at the age of 95 after a remarkable life that saw him incarcerated for 27 years before realising his dream of a democratic and united nation.

Upon his release from prison, Mandela was often a vocal critic of Israel, labelling it a “terrorist state” and expressing his support for the Palestinian cause. But he also affirmed his belief in the Jewish State’s right to exist and spoke of his friendship and admiration for the Jewish people.

“The passing of Nelson Mandela marks the end not only of a remarkable life, but also of an historic chapter of truly outstanding courage, tenacity and leadership,” Executive Council of Australian Jewry Robert Goot said.

“Some of his attitudes towards Israel, which I had the opportunity of raising with him during his visit to Sydney, were questionable, but he was a great friend of South African Jewry and his indomitable spirit of generosity and magnanimity extended to all of humankind.

“We have been privileged to witness the extraordinary journey of a man whose place in history, as an outstanding and courageous leader, is justly secured.”

Australia/Israel and Jewish Affairs Council executive director Colin Rubenstein said Mandela “made a truly outstanding contribution to South Africa and to the world”.

“He had remarkable strength of character and the way he maintained his personal dignity and treated all others with similar respect was truly inspirational,” he said.

“The world was enriched by his life and he was an example to others through his profound sense of morality and his decency. His memory will always be cherished.”

Speaking on behalf of Australia’s Zionist organisations, Zionist Federation of Australia president Philip Chester said Mandela was one of the greatest figures on the world stage who “more than anyone else ensured a peaceful transition from apartheid to democracy for all” in South Africa.

“His decision to denounce violence upon his release from prison, in favour of reconciliation and coexistence, should serve as an example for all movements attempting to gain rights or independence through violent means rather than peaceful negotiations,” he said.

Organisation of Rabbis of Australasia president Rabbi Moshe Gutnick said Mandela “was truly one of the righteous of the nations”.

“His greatness lay not in his physical strength or power but in his greatness of spirit,” he said.

B’nai B’rith Anti-Defamation Commission chairman Dvir Abramovich said the “world has lost one of its most beloved and towering human and civil rights leaders”.

A group of ex-South Africans in Australia are pooling donations to make a contribution through Afrika Tikkun in Nelson Mandela’s name. Donations are welcome at: http://inmemory.gofundraise.com.au/page/FarewellMadiba.