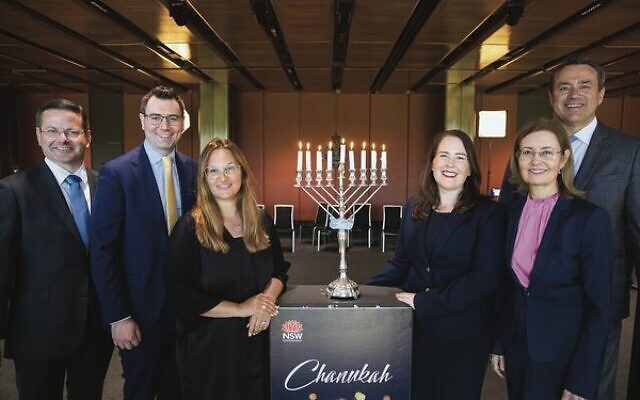 CHANUKAH came early at NSW Parliament, with Minister for Multiculturalism Mark Coure praising the “valued contributions” of the Jewish community.

Hosted by Multicultural NSW, members of the community joined MPs from all sides of politics for a festive pre-Chanukah celebration.

Speaking at the event, Coure said Chanukah has become “one of our great community celebrations”.

“I am moved by the dedication of our Jewish community to not only enlighten us with your rich heritage, but your willingness to open the doors for everyone to celebrate your traditions,” Coure said.

“The NSW government is firm in our belief that diversity, especially religious diversity, should be fostered and celebrated.

“The success of our great multicultural society is built upon people of different faiths and cultural backgrounds coming together as one. I thank the Jewish community for your valued contributions to not only helping maintain the harmony we have here in NSW, but building on it.

“You are inspiring and effective champions of interfaith dialogue.

“The faith and resilience of the Jewish community is well recognised and your contribution to our harmonious society is felt, particularly here in NSW.”

Shadow Minister for Multiculturalism Stephen Kamper added that the event was an opportunity for “both major parties to show their support for the Jewish community in NSW”.

“As Labor members, we are proud of our strong historical connection to the Jewish community, and the role our party played in the establishment of Israel,” Kamper said.

“Let me now acknowledge the contribution of the Jewish community to our state and our country. Your community has enriched the cultural and communal fabric of NSW and Australia.

“You have connected and engaged with other faiths and communities, helping to strengthen the bonds of our multicultural society. An example of this is the NSW Jewish Board of Deputies’ role in achieving a ban on the display of Nazi symbols in NSW.

“What could have been a divisive issue was resolved when the board worked with the Hindu Council of Australia on a landmark joint submission.

“Largely as a result of this multi-faith effort, the banning on Nazi symbols is now law in NSW.”

The event was emceed by Gabrielle Upton MP – her last Chanukah function in Parliament as the Member for Vaucluse.

“I’ve been so gratified to emcee this event each year, and to do the same today joined by Multiculturalism Minister Mark Coure MP, parliamentary colleagues, leadership with the NSW Jewish community and NSW faith leaders.

“From Chanukah, we learn about perseverance and stoicism. The ceremonial lighting of the menorah was led by Rabbi Eli Feldman and amazing women leaders who lit the eight candles.”