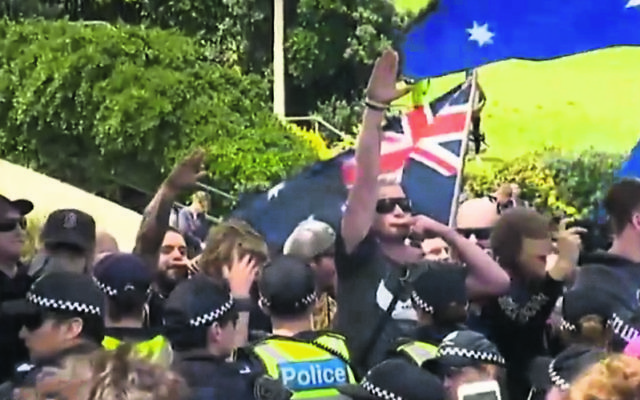 JEWISH leaders have joined a legion of Australians condemning an anti-immigration rally in Melbourne on Saturday attended by Queensland senator Fraser Anning, at which neo-Nazi salutes were made and Nazi paraphernalia was displayed.

Around 100 members of far-right groups shattered the leisurely January atmosphere of the St Kilda foreshore, converging in front of Luna Park to stage the “Reclaim St Kilda” rally. The event was organised on social media by far-right activists Blair Cottrell and Neil Erikson of the United Patriots Front, citing African gang violence as its focus, while a counter-demonstration by anti-fascists was held behind a police cordon.

Cottrell, who has called for portraits of Adolf Hitler in Australian classrooms, was criminally convicted with Erikson in 2017 for inciting contempt and ridicule of Muslims.

Anning, elected in 2016 as a One Nation senator, then dumped – first by One Nation and later by Bob Katter’s Party – praised Saturday’s rally on Facebook. Posting a video of himself with Cottrell, Anning described Sudanese gang members as “garbage” and declared, “The revolution will eventually start.”

Anning infamously used his maiden parliamentary speech last year to call for a “final solution to the immigration problem”.

Prime Minister Scott Morrison, who was on leave, condemned the “ugly racial protests”, tweeting, “Australia is the most successful migrant country in the world … This has been achieved by showing respect for each other, our laws and values and maintaining sensible immigration policies.”

Morrison later stated, “I support entirely the views expressed by Acting PM Michael McCormack, condemning Senator Anning for attending the racist rally in St Kilda and associating himself with extreme and offensive racist views that have no place in our society.”

ALP leader Bill Shorten also slammed the rally, later adding, “There is no excuse or explanation that justifies Anning’s attendance at this rally, and his views have no place in the Parliament.”

Anning denied there were neo-Nazis present, despite Nazi salutes and SS helmets seen in the crowd, and described himself as a “supporter of the Jewish community”.

“Australians died fighting fascism and Nazism, and those views should be confined to the dustbin of history,” he said.

Executive Council of Australian Jewry co-CEO Peter Wertheim said, “Whatever problems there may be with African gangs in Melbourne, they’re not going to be addressed by displays of the Nazi swastika or Hitler salutes. These are matters that need to be addressed by government and all its resources, not by a motley collection of neo-Nazis led by a pair of convicted criminals.”

Commending police action at the event but urging police to enforce racial hatred and vilification laws that were breached, Jewish Community Council of Victoria president Jennifer Huppert stated, “The use of Nazi symbolism and expressions of racism by the attendees is unacceptable behaviour and has no place in Australia.”

Australia/Israel & Jewish Affairs Council (AIJAC) national chair Mark Leibler said of the extremists, “The behaviour of these people is absolutely appalling. They’re inciting, in effect, to violence,” and Anning’s attendance was “a complete disgrace”.

Anti-Defamation Commission chair Dvir Abramovich said the rally “reminds us that anti-Jewish bigotry is very much alive in Australia in 2019”.

Anning, he added, “cannot claim to be a friend of the Jewish community when he stands shoulder-to-shoulder with [Cottrell], an individual who wanted Hitler to be part of the educational system, when he attends a rally in which Nazi salutes are thrown and words of demonisation are peddled”.

A spokesperson for the Jewish Holocaust Centre stated, “We were deeply disturbed to see the symbols of Nazism openly displayed in Melbourne, which has served as a safe haven for one of the world’s largest Holocaust survivor communities.”

Calling on politicians to be more proactive against bigotry, Wentworth MP Dr Kerryn Phelps tweeted, “We should call out this rally for what it is, and it is a demonstration by a neo-Nazi group.”

Member for Melbourne Ports Michael Danby said he “did not think it was a coincidence” that far-right activists were visiting Melbourne for the rally and the Emmy Monash Aged Care centre was daubed with a swastika.