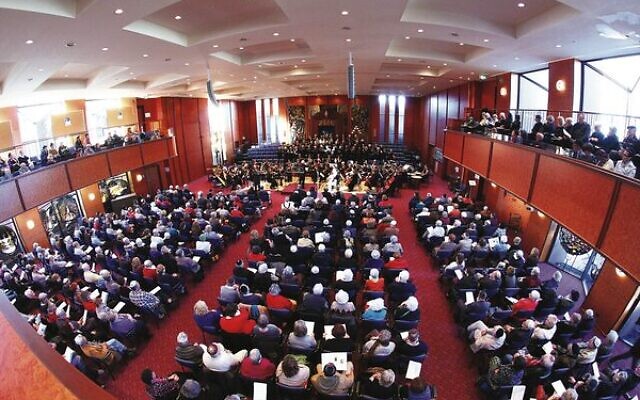 A concert at Temple Beth Israel in 2014. Photo: Peter Haskin

A DISSIDENT faction at strife-torn Temple Beth Israel (TBI) has announced a list of candidates to stand at the congregation’s AGM next month, prompting TBI chairperson Alain Grossbard to state that congregants now have “a clear choice” about the shule’s future, and that the current board has embraced “a generational shift”.

However, TBI Chaverim – which includes both emeritus rabbis of TBI, Rabbi Dr John Levi and Rabbi Fred Morgan, and numerous former presidents – described itself in an email to members this week as “the many concerned members – young and old – who are unhappy about the current state of TBI”.

The faction unveiled its candidates for the September 11 AGM, brought forward to before the High Holy Days. Michael Lawrence – a TBI stalwart co-opted to the board this year to broaden its appeal, but voted off for allegedly breaching rules – is running for president.

He heads a list described as “high-quality and skilled volunteers with a range of backgrounds, ages and expertise”. The group said it is hoping for “a conciliatory conversation” with the board before the AGM.

The TBI Chaverim bloc stated to members it wants clarity about the departure of former senior rabbi Gersh Lazarow after allegations of widespread plagiarism, and the departure of Rabbi Kim Ettlinger, now rabbi of Perth’s Temple David.

It wants “greater transparency” into investigations of workplace bullying allegations against cantor Michel Laloum, which found no serious misconduct by him, but culminated in the board imposing conditions on his return to work.

Laloum, who has launched his own workplace complaint against TBI, reportedly rejected one of these conditions and is on sick leave. TBI Chaverim stated that “selective communications have left our congregation with more questions than answers”.

However, contacted for comment, Grossbard told The AJN, “We are proud of the board’s stewardship of TBI through challenging times, which has seen the strengthening of a world-class education program, the return of TBI’s finances to surplus after decades of debt and deficit, and the maintenance of membership numbers during the pandemic.

“Next month, members face a clear choice between the current approach, which embraces all ages and has seen a generational shift in our approach to governance and workplace standards, and the old way, where matters are dealt with in-house and power is concentrated in the hands of a few.”

He said Chaverim’s announcement is “an opportunity for it to turn its focus from undermining” the TBI community, “and instead tell TBI members the specifics of how it would govern”.