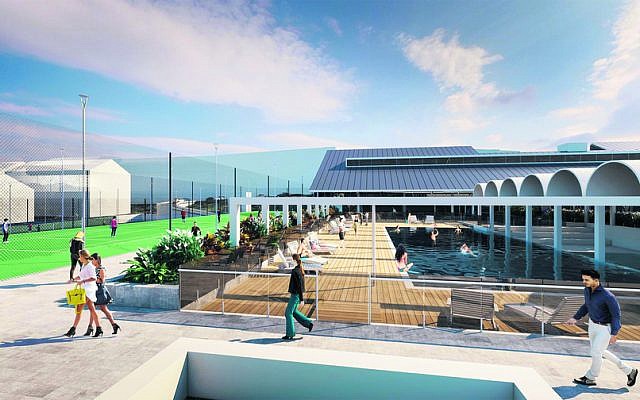 An artist’s impression of the new Hakoah Club White City.

TWELVE years after selling its Hall Street, Bondi premises, the dream of a new Hakoah Club at White City is another step closer, with the board expecting construction to commence in the second half of next year.

The Sydney Eastern Planning Panel has approved Hakoah’s application for modifications, which represent a “substantial improvement” to its approved concept development application from 2015 for a new club and community centre at the site, by 3-2.

The plan allows for the conservation of the historic southern grandstand at White City as a three-level fitness, wellness and community facility.

The approval, which was granted on September 5, means Hakoah can now seek formal development approval from Woollahra Council in the coming months.

He added that “the club looks forward to working with residents and the local Paddington community.”

Over the last few months Hakoah has undertaken a process of communal engagement and research, speaking to community organisations, individuals and groups across all areas and holding focus groups.

Members of the community can also have their say via an online survey. “Indications are that there is tremendous interest and excitement in the community for the project,” Lowy said.

“We have been overwhelmed at the goodwill and positive attitude with which the old Hakoah at Hall Street is remembered, and the passion expressed by the community for a new centre at White City.

“The next few months are an important period. We will continue our communal engagement to the end of this year, and with further good progress, expect to commence construction in the second half of next year.”

Although the application was approved, panel members Mary-Lou Jarvis, the deputy mayor of Woollahra Council, and Toni Zeltzer, a Woollahra councillor, voted to defer it to address concerns about traffic flows and child safety.

“Another DA will come forward to the Council and then to the panel for consideration so there’s an opportunity for Hakoah to resolve those issues,” Jarvis told The AJN.