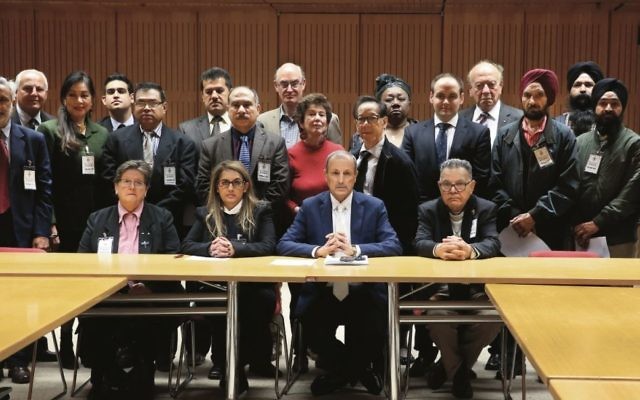 NSW Jewish Board of Deputies CEO Vic Alhadeff (centre) with representatives of other community groups at NSW Parliament House in 2016.

FORMER president of the NSW Anti-Discrimination Board Stepan Kerkyasharian last week began consultation with community groups on a number of issues relating to Section 20D of the Anti-Discrimination Act, as communities continue to rally for “urgently needed” change to the legislation.

The Keep NSW Safe coalition of communities is arguing that the state’s current race-hate legislation is “weak and ineffective”, and “does not effectively reach those who set out to promote racist violence”.

“Our government needs to act now, before we again see serious racist violence committed in NSW that could otherwise have been prevented,” the coalition urged.

Noting that Section 20D was inserted in the Act in 1989, Kerkyasharian told The AJN this week, “There has not been a single prosecution under that section of the act. The perception in the community is that the legislation is not meeting its objectives.”

The most notable case was the decision by NSW Police not to prosecute Ismail al-Wahwah, spiritual leader of Hizb ut-Tahrir, who threatened that “Judgment Day will not come until the Muslims fight the Jews” and “the ember of jihad against the Jews will continue to burn … an eye for an eye, blood for blood, destruction for destruction”.

“Following the report by the Legislative Council Law and Justice Committee, former NSW attorney-general Gabrielle Upton commenced the process of consultation with a view to seeking consensus on the issues raised,” the spokesperson said.

“The government is committed to obtaining the views from the community on this issue, including the right balance between preserving freedom of speech and protecting people from violence.

“To that end, the NSW government has requested Dr Stepan Kerkyasharian undertake consultation with community groups on a number of issues relating to Section 20D of the Anti-Discrimination Act.”

Acknowledging that a “diverse” coalition of community groups have come together urging reform to the legislation, Kerkyasharian added, “They have put forward their views, their recommendations, and obviously I’m taking into account their collective views.”

NSW Jewish Board of Deputies CEO Vic Alhadeff said: “We have a cordial relationship with Mr Speakman and hope to be meeting with him shortly to discuss a range of issues.

“We are working closely with the government on the need to reform Section 20D and are confident of achieving the outcome that is so urgently needed.”

Kerkyasharian is expected to finalise his consultations in the next six or seven weeks before a report is presented to the Attorney-General.