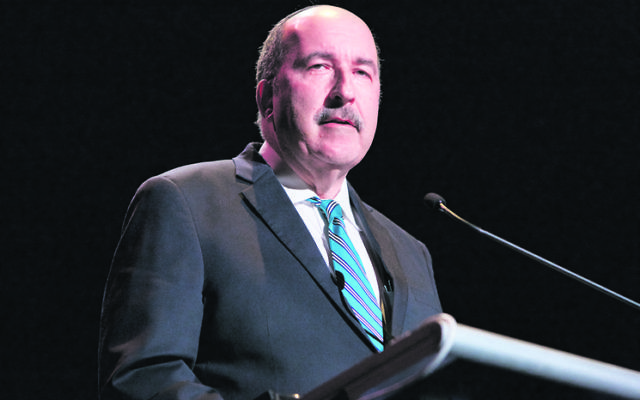 Gold, the president of the Jerusalem Centre for Public Affairs, is a former adviser to Ariel Sharon and Benjamin Netanyahu and a former director-general of Israel’s Foreign Ministry.

While resurgent anti-Semitism was a global issue, he said the greatest danger to Jews worldwide “involves the name of one individual – Jeremy Corbyn”.

He said American Jewish leaders had told him if Corbyn wins the next British election, the ripple effect for world Jewry “will be extraordinary”.

“Britain will set an example … Blatant anti-Semitism, which never ended, will get a huge boost, and we will see expressions of anti-Semitism grow,” he said.

Gold quoted the deputy head of British Labour, Tom Watson, who said his party would “disappear into a vortex of eternal shame” because of the issue of anti-Semitism.

He spoke of Corbyn describing Hamas and Hezbollah as “friends” in 2009 and calling “for a dialogue between Great Britain and Hamas”.

“He later he said he regretted it but that’s what we call lip service,” Gold said.
“Legitimising Hamas is legitimising people who kill Jews.”

He said Corbyn’s laying of a wreath at the graves of Palestinian terrorists in Tunisia “legitimises terrorism”, and also noted Corbyn’s efforts in the 1990s to have the terrorists who exploded car bombs outside the Israeli Embassy and British Jewish communal offices in London freed.

Speaking on Labour’s recent watering down of the International Holocaust Remembrance Alliance’s anti-Semitism definition, Gold said, “They’re diluting the definition so they can take positions that are antithetical to our existence.”

Two main ways anti-Semitism is expressed are falsely accusing the Israeli army of crimes against humanity and denying Jewish history in Israel and Jerusalem, he said.

“If you say Jews have no legitimate basis for being in Jerusalem, for being in Israel, you engender anti-Semitism,” he said.

“We have to beat this anti-Semitism – which is based on lies – with substance.

“We have to educate the next generation to not be scared, not be intimidated, but to stand strong and fire back.”

The oration was also presented by the NSW Jewish Board of Deputies.