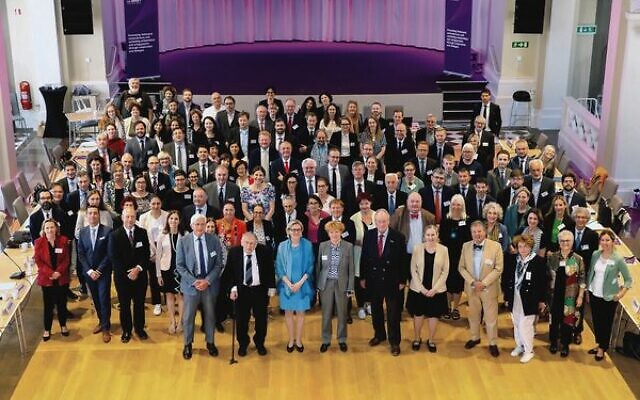 In 1998 the International Holocaust Remembrance Alliance (IHRA) was formed and in 2000 it committed itself to implementing the Stockholm Declaration on Holocaust Education, Remembrance and Research. Today IHRA has 35 countries as full members, 10 as observers, and eight international partners.

As it has expanded, IHRA’s importance has grown. Today it is even more relevant to our contemporary society as sadly antisemitism, Holocaust denial and Holocaust distortion have been increasing. The pandemic and the war in Ukraine have exacerbated these problems, often through social media which plays such a significant role in the dissemination of conspiracy theories and other antisemitic manifestations.

The IHRA meets twice a year hosted by the president, a role which rotates annually between member countries. Each country sends a delegation, usually headed by an ambassador, though in some cases government ministers have led their delegation.

The national delegations consist of government appointed experts, from within government, academia, civil society, museums and memorials, or communities. Also present are representatives of the international partners: the UN, UNESCO, the OSCE’s Office for Democratic Institutions and Human Rights, the EU’s Fundamental Rights Agency, the Arolsen Archives (previously the International Tracing Service), and the Claims Conference.

The meetings involve three days of expert discussions which inform the final day’s diplomatic meeting where the heads of delegation debate and vote on resolutions.

For the last two years, in response to COVID, the German and Greek presidencies organised online meetings. This year’s return to in-person meetings under the Swedish presidency was greeted by all participants with delight and more than 200 people attended. The theme was “Together for impact”.

Addressing the IHRA Plenary, Swedish Prime Minister Magdalena Andersson highlighted the growing international concern warning, “We must remain steadfast in our efforts to counter violence, hatred and ignorance, which are increasingly undermining peace and democracy. Holocaust denial and distortion are gaining ground – we cannot allow this to happen.”

IHRA chair ambassador Ann Bernes in her welcome address reminded participants that IHRA’s “meetings are critical reminders of how important it is to face this history and protect the facts, so that we can develop policies and foster societies that can move forward together”.

Australia joined IHRA in July 2015 and in June 2019 was accepted as a full member. An intended celebration of our membership was delayed due to COVID and finally took place in Stockholm with a reception hosted by the Honourable Bernard Philip, Australia’s ambassador to Sweden and head of Australia’s IHRA delegation, who graciously welcomed all the guests at his residence.

This was the first plenary where Aotearoa New Zealand was represented. Two New Zealand diplomats attended and their application to become an observer to IHRA was approved.

Australia warmly welcomed the decision. We hope to see experts from New Zealand attend in the future.

The war in Ukraine was the major topic of discussion at IHRA. It was approached from many angles. While emphasising the loss of life as the most important consideration, IHRA also discussed the harm to sites related to the Holocaust and to Holocaust related archives.

The Russian disinformation, promoting their attack on Ukraine as “de-Nazification” and the way this abuses memory of the Holocaust was discussed at length, as was the very complicated history of Ukraine during the Holocaust. While some Ukrainians saved Jews, others killed them. Even among Ukrainians opposing Nazism, both responses can be found.

In his address to the plenary, which he calls his “sermon”, IHRA honorary chairman Professor Yehuda Bauer stressed the importance of all IHRA member countries showing their support for Ukraine following Russia’s unprovoked attack.

“We should say what we think, and we must inform the world that we stand behind the Ukrainian efforts to resist an unprovoked aggression by a major power,” he said.

Other discussions examined countries’ progress on their pledges made at the Malmo Forum last year. Many have made significant strides forward. The process of creating new commitments has inspired new investments, new projects, and a fresh look by countries at their portfolio of Holocaust education, research and remembrance engagements.

At this meeting Israel successfully bid to be IHRA president in 2025, 80 years after the end of the Holocaust and 15 years after last holding the presidency in 2010. This will follow the presidencies of Croatia in 2023 and the United Kingdom in 2024.