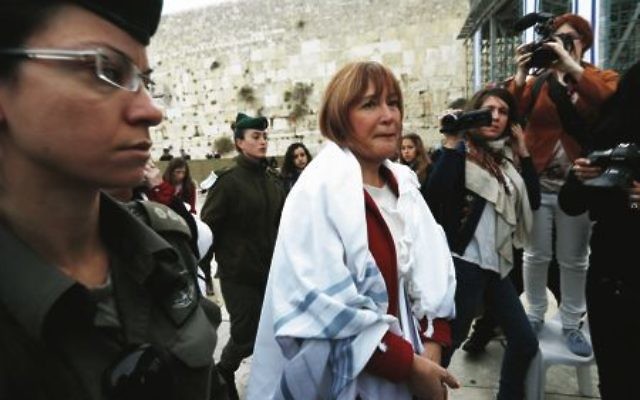 The police crackdown on women’s communal prayer at the Western Wall may have come to an end, after a district court ruled that the police shouldn’t have detained worshippers last month.

Police detentions of female worshipers who gather at the Wall for prayer once a month have become more common of late. But the women have insisted that this treatment is unjustified.

In early April, after police detained five women and charged them with disrupting public order, a court criticised the detention and rejected the charges. State prosecutors went on to appeal the decision in a higher court, the Jerusalem District Court, and after the hearing the more prestigious court ruled that the detentions were, in fact, unjustified.

The judge said neither of the main legal grounds cited by the police to justify detaining women and seeking restraining orders to keep them away from the Wall are valid. The women were released with no conditions and the police’s request for a restraining order from the holy site was rejected.

Women of the Wall’s press officer Shira Pruce told The AJN that the decision is “unprecedented and extremely exciting”.

David Barhoum, attorney for the group, said: “There is no doubt that this decision is crying out and calling to the authorities to change their approach to the prayers of Women of the Wall.”

Another member of the group’s legal team, Einat Horovitz, commented: “The court has rejected any reasonable cause for a policy of repeated detainment and arrests of Women of the Wall by police.”

Women of the Wall and its supporters received another boost last week, when the plan to liberalise the Wall took a step forward, with Israeli Prime Minister Benjamin Netanyahu indicating that he’s on board.

At Netanyahu’s request, Jewish Agency chairman Natan Sharansky came up with a proposal to establish a large section for Orthodox women who want to hold women-only services as well as for Reform and Conservative Jews who want to hold egalitarian services. His plan, released three weeks ago, comes after two decades of Women of the Wall fighting for the right of women to hold public prayers at the Wall.