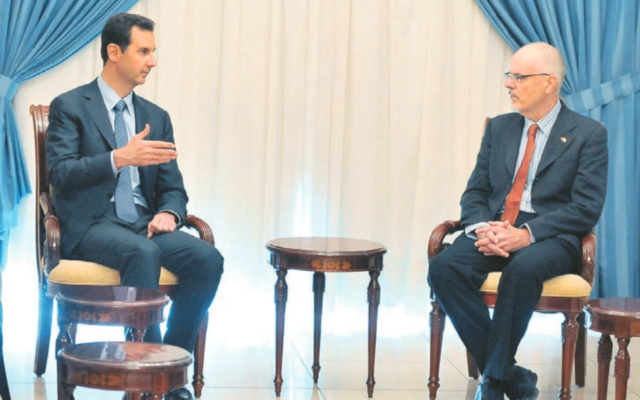 Communal leaders have slammed a court ruling that controversial university lecturer Tim Anderson was unlawfully sacked over a Nazi swastika, with NSW Jewish Board of Deputies CEO Darren Bark pointing out his actions “may well” have been illegal under current laws.

The University of Sydney academic was fired in 2019, a few months after he superimposed a swastika over an Israeli flag during a lecture about civilian deaths in Gaza. He had already been issued with two warnings by the university following years of controversial statements and activities, including several trips to North Korea and Syria, and expressions of solidarity with their dictatorial regimes.

Anderson also trolled academic Kylie Moore-Gilbert online following her release form an Iranian prison in 2020, repeatedly accusing her of being an Israeli agent.

Backed by the National Tertiary Education Union (NTEU), Anderson initiated Federal Court proceedings against his former employer two months after his sacking. He lost the lawsuit in November 2020, before then launching a successful appeal.

This week Federal Court Justice Thomas Thawley ruled Anderson was exercising his intellectual freedom and accepted the lecturer’s argument that he created the swastika graphic for academic purposes – to encourage critical analysis and point out comparisons between “fascist systems”.

In an affidavit, Anderson told the court, “While some may feel offended by Nazi-Zionist analogies, I say the inclusion of the analogy in that graphic was appropriate. The purpose of the slide was to encourage critical analysis … No student raised any issue with the slide during the seminar.”

The NTEU described the ruling as a “win for academic freedom” and has called on Sydney University to reinstate Anderson.

Bark expressed his deep disappointment with the court’s decision.

“We vehemently reject any assertion that imposing a Nazi swastika over an Israeli flag is acceptable conduct befitting a university lecturer in a position of influence,” Bark said. “This display was grossly insensitive and caused deep offence, not only to the Jewish community but to every well-meaning Australian, including our veterans who fought against the tyranny of the Nazi regime.

“Under legislation recently passed by the NSW Parliament, Dr Anderson’s conduct may well have been illegal if undertaken today.

“Nazi symbols – used in such an offensive manner – should have no place in academic institutions or anywhere in NSW. They are a symbol of hate and we again commend and thank the University of Sydney for the principled position it has taken on this matter.”

Executive Council of Australian Jewry co-CEO Peter Wertheim said, “Although we are still examining the judgment, it is incomprehensible how a graphic comparison of Israel to Nazi Germany, utilising a contemporary anti-Jewish trope, can be characterised as an exercise of intellectual freedom. The fact that this content was disseminated as part of the teaching materials for an accredited university course made it all the more disturbing.

“The IHRA Working Definition of Antisemitism, which Australia has embraced with the endorsement of both major parties, tells us that such conduct is antisemitic.

“Granting any kind of permission to such conduct is, therefore, contrary to community standards in contemporary Australia, even after allowing for the wide scope for academic freedom which a democratic society necessarily safeguards. The decision may well be seen as granting a licence for more conduct of this type.”

Sydney University said it was disappointed with the court decision, “which focused on just one aspect of the proceedings initially brought against the university”.

“We note that we previously succeeded in having all other aspects of the proceedings dismissed,” the university said in a statement.

“We will now take time to review the decision and consider our response and next steps.”