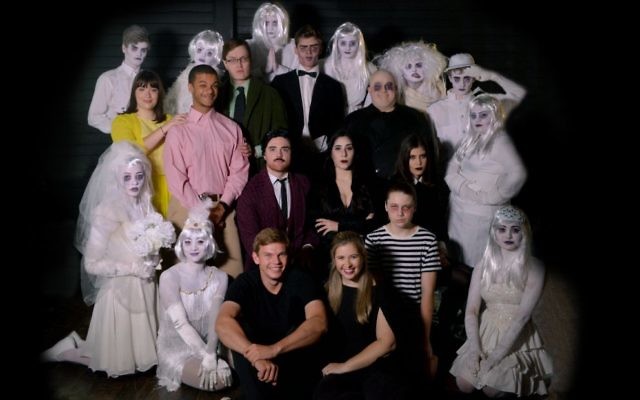 Cast of The Addams Family with director Carly Fisher (front).

It’s a step back into the chaotic world of the Addams family as the popular musical returns to the Sydney stage. Yael Brender reports.

THE creepy and kooky Addams family return to the stage when the NSW University Theatre Society (NUTS) presents its production of The Addams Family musical in August.

Directed by Moriah College graduate Carly Fisher, the musical follows the turmoil facing the elegant Morticia and her devoted husband Gomez when their 18-year-old daughter Wednesday falls in love with a “normal” boy, Lucas Beineke.

“I want to celebrate difference through my interpretation of this show – the Addams family are that same spooky, kooky family that many people grew up with, but their difference is almost muted by their incredibly strong family values and passion for truth and kindness,” Fisher told The AJN.

“Everyone can find something of themselves in any of these characters – we are paying homage to the original but indulging audiences in a new and exciting version of the beloved family.”

With music and lyrics by renowned composer Andrew Lippa, The Addams Family is set to be one of the most ambitious productions in NUTS history, with an ensemble of more than 30 actors as well as elaborate sets and costuming.

In the starring role of Wednesday is Australian-Israeli Lali Gill, who went to school in Israel and then Byron Bay before graduating with a Diploma in Music Theatre last year.

She said she was inspired to take to the stage after seeing The Lion King on London’s West End in 2008.

“I was so blown away that humans could create what I’d seen. I walked out of the theatre and decided there and then that I wanted to give it all a go,” she said.

Gill went on to star as Lucy in You’re A Good Man, Charlie Brown, Roxie in Chicago and Marty in Grease.

The biggest challenge to playing Wednesday, she reveals, is staying true to the iconic character that the audience love while making the part her own.

Gluckman has been interested in theatre for many years, with her stage credits including 13 and Little Shop of Horrors.

“I just love things that are larger than life, and that’s what drew me to musical theatre in the first place,” said Gluckman, who graduated from Emanuel School in 2013.

“The smallest of plot progressions or emotions can allow for seven-minute song and dance numbers just fills my heart with joy.”

Although Gluckman is overjoyed to be playing the Addams family matriarch Morticia, she admitted that it is a challenge playing such a nostalgic icon.

“You really have to find the right balance between making it your own, but still paying homage to the Morticia people know and love.”

Kane has also been acting since childhood and performed in many school productions before going on to star in A Man of No Importance at the King Street Theatre and more than half a dozen musicals with the Sydney University Musical Theatre Ensemble.

As devoted husband Gomez, Kane’s favourite scene is one he shares with Wednesday, where they sing a duet explaining the bittersweet feeling of watching her grow into an independent woman.

“This production has been an absolute whirlwind,” said Kane. “It’s been hugely rewarding playing a fun character and singing great songs with lots of wonderful people.”

Completing the trio of former Emanuel students is ensemble member Micayla Laurence, who has nothing but praise for the cast and crew.

“Everyone is super supportive,” she said. “The choreographer is amazing, the dancers are incredible, the entire crew is fantastic.”

Fisher, who described bringing the show to life as “a rollercoaster of an experience”, said that she is very proud to be directing a show that promises to be a really fun production.