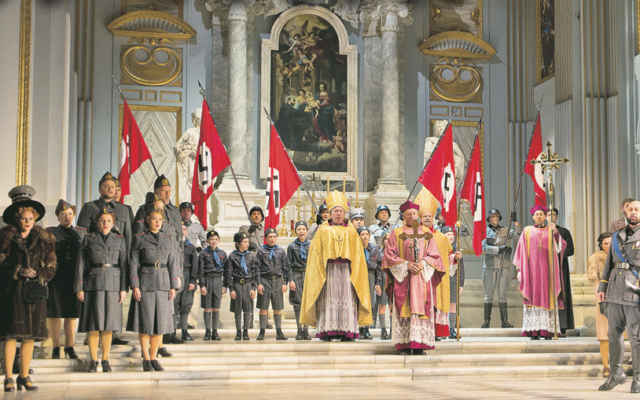 “It’s such a wonderful gesture,” said Tosca’s revival director Matthew Barclay. “They want other people to have the same smiles on their faces, and be moved to tears like they have been,” he added, referring to Isaac and the late Susan Wakil’s substantial donation to Opera Australia.

Through the grant provided by the Susan and Isaac Wakil Foundation Access Program, Opera Australia was able to encourage first-time opera-goers to attend John Bell’s celebrated adaption of Puccini’s Tosca at the Sydney Opera House – with the enticing offer of $20 per ticket for 2000 first-time opera-goers.

“The Opera House is such an iconic building … This is a great introduction to opera-going as an activity for people who might otherwise have just walked around the outside and thought, ‘I can’t go in there because it’s all a bit mysterious’ … You want to break down the mystique of what goes on inside the Opera House so that people can take up the opportunity,” says Barclay, who held the reins for the most recent run of Tosca.

In light of a disruptive year gone by, the grant came at a pivotal moment for the arts sector. “COVID has been tough. It’s been really challenging for the company to maintain its sense of culture,” Barclay comments.

“The culture of the organisation is built around people sharing the experience of rehearsals and performance. Without that, the culture of an arts company becomes very fragile.”

Originally set in the Napoleonic era, Australian director John Bell transplanted Tosca to the height of Nazi power in 1943. A dramatic tale of oppression and resistance, Tosca opens with a chilling display of swastika flags and Nazi banners hanging from the glorious interior of a white marble church. The placement of Tosca in a more contemporary context “brings extra muscle”, Barclay says of Bell’s production. “He wanted to make sure that he was exploring the ugly realities of life, which is what Puccini was [focused on] with these operas – putting ordinary people on stage and exploring the realities of life’s hardships and not glossing over them.”

Such a display of unhampered power lends itself to a spell-binding musical script – “dramatic music that is like an original movie score”, Barclay conveys. Uniting all the components of Tosca including actors, chorus, orchestra, set and lighting, was an exercise in patience amid the many COVID-19 restrictions.

Starring as Tosca and coined the “Lady Gaga of Opera”, Carmen Giannattasio emerged from hotel quarantine after rehearsals had begun, but her entry into the production proved a smooth transition that was helped by her previous experience working overseas with baritone Marco Vratogna. Vratogna, who played Scarpia in the 2018 production at the Arts Centre Melbourne, is “a really charismatic person … a bit like a rock star,” says Barclay.

Diego Torre, too, again took on the role he played in the 2018 production, that of Cavaradossi. “It’s been an intense rehearsal period because it’s been reduced but it’s been productive … You can’t underestimate the spirit and goodwill that comes together from these kinds of times. Having the opportunity to sing, direct and come together after missing that brings a certain amount of cohesion to the stage,” said Barclay.