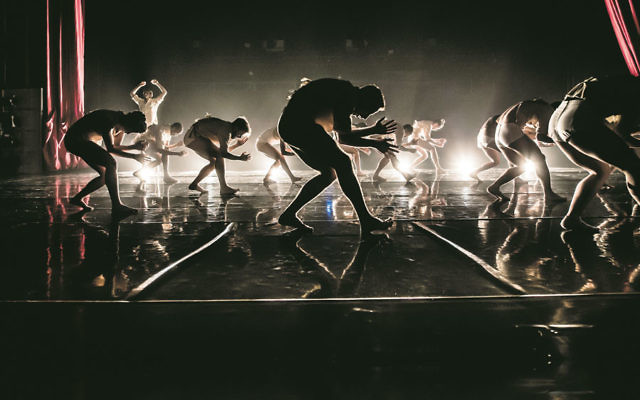 IN 1973 at the beautiful Kibbutz Ga’aton in northern Israel, dancer Yehudit Arnon founded what has become one of the world’s most celebrated modern dance groups – the Kibbutz Contemporary Dance Company (KCDC).

Arnon’s motivation could not have been clearer or, indeed, more meaningful. Some three decades earlier, as an inmate of Auschwitz, an extraordinarily resolute young Arnon was punished by the Nazi soldiers for refusing to dance for them at Christmas.

Surviving the unimaginable horrors of life in the concentration camp, Arnon moved to Israel in 1948. There she settled at Kibbutz Ga’aton in the western Galilee region where she devoted her life to dance until her death in 2013 aged 87.

In 1996, Rami Be’er took over the artistic direction of KCDC after working as a dancer and choreographer with the company for many years.

For Be’er, Kibbutz Ga’aton was also his heart and home – he was born on the kibbutz to Holocaust-survivor parents and still lives there today.

As a child, Be’er studied under the direction of Arnon.

“Like my parents, Yehudit came to Israel after the Holocaust to create a new life in a new country on a new kibbutz,” says Be’er by phone from Israel last week.

“A large part of my family died in Auschwitz – that was obviously a big part of my history.
“Yehudit then became my first teacher in dance and movement. When I was just three years old in kindergarten, she recognised and saw the talent and potential. She knew how to encourage, support and guide me. For me, that was very special.

“Yehudit was an amazing woman. She dedicated so much of her life to dance and to education in dance and movement.”

Now 58 and a married father of a grown-up son and a daughter, Be’er is himself an inspiration to dancers and choreographers the world over.

Since taking the helm of the KCDC, he has choreographed more than 50 works for the company. The multiple award-winning Be’er has also created many original works, and has been commissioned by leading international dance companies ranging from Austria’s Graz Opera Ballet to Switzerland’s Ballett Basel and even Israel’s Batsheva Dance Company.

On August 31 Be’er will be in Australia with the KCDC for the first time in 23 years, premiering his exuberant new work, Horses in the Sky, at the Sydney Opera House.

Featuring 16 dancers, the -cutting-edge production is accompanied by a compelling soundtrack that includes music by Bjork, Olafur Arnalds and Tim Hecker.

“It’s very exciting,” says Be’er. “We last performed in Australia in Melbourne, but have never performed at the Sydney Opera House.

“Horses in the Sky is my newest work. This will be the first time we’ve performed it outside Israel.”
Be’er says he invites audiences to take part in a journey to which they are free to relate through their own personal experience and interpretation.

“I prefer to see my work, not as a certain story, but as a suggestion that I offer to the individual spectator,” he reflects. “I follow my beliefs and my truths and I leave the spectator with their own memories, feelings and thoughts to connect with, as well as some question marks and some points to think about.”

Where does Be’er find his unending inspiration from?

“It comes from different sources – from everything from music to the movement and my dancers, from poems and articles and books that I read, to paintings, sculpture and nature itself – to life all around us,” he says.

Today, Be’er oversees the design of the sets, the lighting and at times the costumes for his productions as well as, of course, the choreography.

“It’s a whole picture that I bring to the stage, and so these things are all connected,” he says.
Be’er’s wife Nitza, also a former lead dancer with KCDC, now works by his side at the company. Clearly, for the couple, being immersed in the world of modern dance can be all-consuming, but they wouldn’t have it any other way.

“We do live dance 24 hours a day,” says Be’er. “It’s not something you wake up in the morning and go to the office or place of your work for. It’s a whole way of life around the creation of the vision and the work of the company.”

The Kibbutz Contemporary Dance Company’s Horses in the Sky is at the Sydney Opera House from August 31 to September 3. Bookings: www.sydneyoperahouse.com.