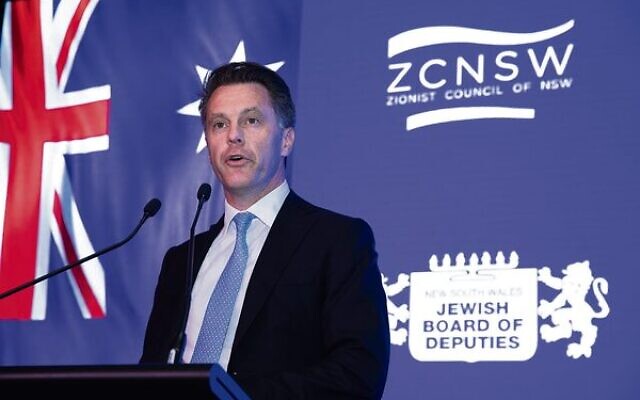 NSW Labor Leader Chris Minns has slammed his own MP Anthony D’Adam for stating that Israel was founded through “terrorist action” and “engaged in massacres” to gain its independence.

D’Adam’s latest anti-Israel comments were made during a NSW parliamentary motion that recognised Israel’s Independence Day.

The Labor MP compared the complexities surrounding Australia Day with Yom Ha’atzmaut, by saying the date Israel celebrates gaining its independence, May 15, 1948, is also, “the Nakba, literally ‘the Catastrophe’ for Palestinian people, in which 700,000 Palestinians were dispossessed, driven into exile and prevented from returning”.

“We cannot talk about Israeli Independence Day without acknowledging the trauma, the dispossession and the erasure of Palestinian identity that this event reflects.”

Minns told journalists it was inappropriate for D’Adam to use a motion on Israeli independence to “in effect launch inflammatory rhetoric against that same nation”.

“I will speak to him and I’ll remind him that he’s not a delegate of the United Nations, he’s a member of the NSW Parliament, his obligations and responsibilities to the people who live in this state and his obligations in my view, are to focus on NSW first,” Minns said. “When we’ve fixed everything in NSW then you can focus on the Middle East.”

Parliamentary Friends of Israel chair Scott Farlow said, “Australia should be proud of its relationship with Israel, and Israel should have no closer friend in the world than Australia.”

NSW Jewish Board of Deputies CEO Darren Bark thanked Minns for his support of Israel and of the Jewish community, and called on D’Adam to “cease his consistent attacks on the Jewish State”.

“To suggest that Israel was founded through ‘terrorist action’ is fundamentally flawed and a gross distortion of basic history and facts,” Bark said.

“The NSW Jewish Board of Deputies has previously raised its concerns about Mr D’Adam directly with Opposition Leader Chris Minns.

“We call on Mr D’Adam to retract and apologise for his ahistorical and inflammatory remarks.”