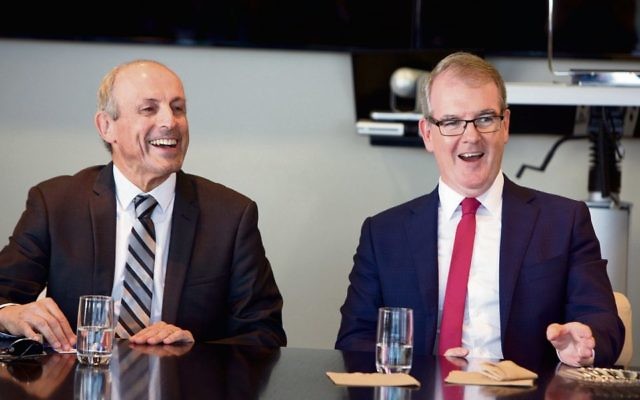 NSW Labor has confirmed that $480,000 has been committed to fund six places in the Shalom Gamarada Indigenous Residential Scholarship Program as part of its Aboriginal Affairs policy.

It follows a verbal promise made by shadow health minister Walt Secord at an event celebrating the program last August at NSW Parliament House.

Announcing the policy on March 1, Opposition Leader Michael Daley – who also addressed a NSW Jewish Board of Deputies Luncheon Club event last week on a range of issues of concern to the Jewish and wider communities – said Labor had always acknowledged the unique cultural heritage of the First Peoples as a priority.

“It’s important that a NSW Labor government continues to build on the existing relationship with the NSW Aboriginal community to achieve lasting generational change,” he said.

Secord said he wanted to provide “practical and tangible programs” which close the gap between Indigenous and non-Indigenous Australians.

“The Australian Jewish community has a proud history of working towards reconciliation stretching back to the Freedom Ride in the 1960s to the ground-breaking work of the late-Ron Castan QC with Mabo and land rights to present day practical reconciliation measures like Shalom Gamarada,” the NSW Parliamentary Friends of Israel deputy chair said.

“The Jewish community has a right to be proud of the work of Shalom Gamarada.”

“The program has been operating since 2005 and has produced 48 Indigenous graduates in a range of professions,” she said.

“Funding has been an ongoing issue and securing these scholarships will ensure that we can continue the important work of increasing the number of Indigenous doctors in Australia.”

Since 2009 its graduates have included 24 doctors, one optometrist and one exercise physiologist.

The program has a completion rate of more than 70 per cent, compared to 47 per cent for Aboriginal and Torres Strait Islander students in Australia.