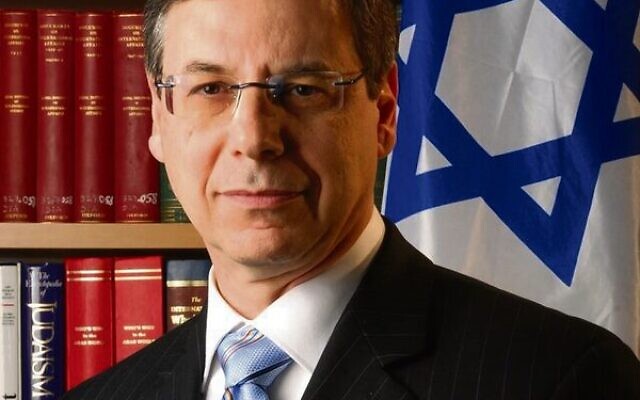 “We have a lot of things going on for the State of Israel,” former MK and Israeli ambassador to the US Danny Ayalon told The AJN this week ahead of his visit to Australia.

Ayalon, who will be the guest speaker at Australian Friends of Magen David Adom annual campaign events in Sydney, was responding to a question about Israel’s recent spate of elections.

“Most of the achievements that the country has made in the last few decades is not necessarily because of government, it’s despite the different governments,” he said.

With Israelis now heading towards their fifth election in three and a half years, he predicted the electoral deadlock will continue.

“The problem today is that there is no ideology, it is for or against Bibi [Benjamin Netanyahu]. The election is all about one person and this is wrong,” he continued.

“I would expect this one person just to stay away and put the country’s interests above their own. If he was out of the picture, there would have been a national unity government long ago.”

Having served in the Knesset from 2009 to 2013, Ayalon said his tenure “strengthened my thinking that we need electoral reform”, offering regional representation as an alternative.

“It would bring about better politicians who are answerable to their constituency,” he said.

“Many of them are picked by the leader of the party based on their loyalties and not their sincerity, their capabilities.”

Commenting on Joe Biden’s recent visit to Israel, Ayalon said the US President’s presence sent a message to the broader Middle East of “the ironclad support of the United States to Israel’s security and wellbeing”.

“It actually strengthens Israel’s position here in the region, but also strengthens its deterrence against those who are trying to attack it, whether it’s Hezbollah or Hamas, and first and foremost of course, Iran,” he said.

“Camp David exposed I would say their true intentions, which was not to build a state of their own, but to destroy our state.”

He dismissed Saudi Arabia’s insistence that its announcement to allow Israeli civilian flights over its airspace had nothing to do with steps towards normalisation.

“The common interest against the major threat of Iran, this is something that binds us all together,” Ayalon said.

“And the second thing, which is not so much talked about … is climate change and the scarcity of resources. I would say that the real danger to the region is food security … and for that, all these countries in the Gulf, they need Israeli technology.”

But full normalisation with the Saudis would only come with regime change, he said.

“King Salman, who is 87 years old, he’s the old guard. For him Israel is still the enemy, even in an emotional way. His son Mohammed bin Salman, once he is on the throne, then we will see the formalisation of the agreement.”

On Iran, Ayalon said the dilemma facing the West is deciding whether a weak nuclear deal or no deal at all is preferred.

While a weak agreement might slow Tehran’s progress, he said the resulting resurrection of Iran’s collapsing economy “would put billions of dollars into the coffers of the Iranian Revolutionary Guards” as well as proxies such as Hamas and Hezbollah.

He also noted the original 2015 agreement did not curb Iranian development of ballistic missiles, which are specifically built for nuclear warheads.

Addressing Israel’s conflict with the Palestinians, Ayalon – who was a member of Israel’s delegation at the 2000 Camp David talks and as ambassador to the US worked with president George W. Bush on the “roadmap to peace” – said they are still “not ready” for peace.

He recalled former Israeli prime minister Ehud Barak putting Jerusalem and the Temple Mount on the table at Camp David.

“We were all shocked by the offer and we were even more shocked by the refusal of [then Palestinian Authority president Yasser] Arafat to take it,” he said.

“Camp David exposed I would say their true intentions, which was not to build a state of their own, but to destroy our state.”

Taking lessons from the failure of those negotiations, he said the road-map’s three stages were an end to violence, an end to incitement and “their political war” against Israel, and finally, a return to final status talks.

“Why didn’t it take off? Because violence never stopped. Arafat never subscribed to stop incitement, and unfortunately, not even those who replaced him. And this is where we are today,” he said.

Ayalon said Magen David Adom is “almost critical to the wellbeing and the security of the State of Israel and its citizens”.

“As a rescue and first responders organisation it is one of probably the most able in the world,” he said.

Noting its relationships and knowledge sharing with the Red Cross and Red Crescent, he continued, “It’s also an organisation that promotes Israel in a very, very positive way … it’s a very, very, I would say, good vehicle to strengthen relations.”