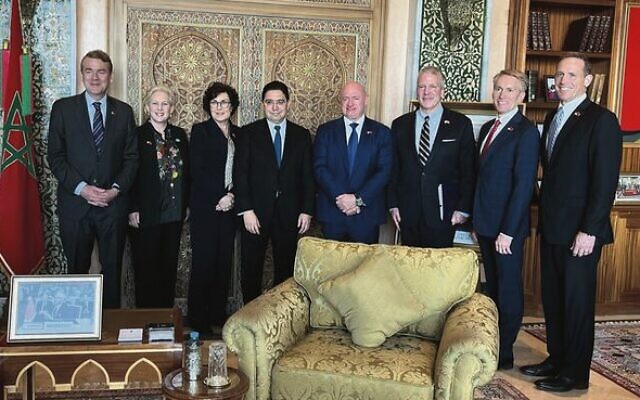 The US delegation in Rabat with Moroccan Foreign Minister Nasser Bourita (fourth from left) prior to arriving in Israel. Photo: Jacky Rosen/Twitter

A delegation of US senators that arrived in Israel on Tuesday asked not to meet with far-right ministers Bezalel Smotrich and Itamar Ben-Gvir or any members of their hardline factions, according to an Israeli official.

The request was made by the office of Democratic Senator Jacky Rosen, who is co-leading the bipartisan delegation along with Republican Senator James Lankford, the Israeli official told The Times of Israel, confirming a report on the Axios news site.

The Biden administration has thus far restrained from publicly announcing such boycotts, with Secretary of State Antony Blinken explaining that the US will be gauging the new hardline Israeli government by its policies rather than its personalities. Other Biden officials, such as Ambassador to Israel Tom Nides, have said their main interlocutor in Jerusalem will be Prime Minister Benjamin Netanyahu and they will be holding him directly responsible for the moves of his far-right partners.

But others in the Democratic party appear less comfortable with the makeup of Netanyahu’s coalition, which has been deemed the most right-wing in Israel’s history. The fact that the request not to meet with Smotrich and Ben-Gvir came from Rosen, who is seen as one of the Democratic caucus’s most pro-Israel members, also demonstrates how widespread the unease in Washington is, particularly within Biden’s party.

Smotrich, who is serving as Finance Minister as well as a minister in charge of West Bank policy in the Defence Ministry, has long advocated for annexing large parts of the territory without granting Palestinians in those areas equal rights. He has also expressed antagonistic views toward Arab Israelis and LGBTQ individuals.

Ben-Gvir, who serves as National Security Minister, holds many of Smotrich’s views and is a self-described disciple of the late racist rabbi Meir Kahane. He was convicted of terror offences over his support for Kahane’s outlawed Kach movement and has long advocated for deporting “disloyal” Arab Israelis.

Both Ben-Gvir and Smotrich have also made repeated disparaging comments toward Reform Judaism that were likely to not have sat well with Rosen, who was president of her Reform synagogue in Nevada before entering Congress.

Smotrich’s office confirmed that he doesn’t currently have any meetings planned with the delegation of seven US senators. A spokesman said he has been busy crafting the next annual budget and only became aware of the delegation through media reports.

Ben-Gvir’s office declined to say whether a meeting would take place but issued a statement claiming that the Axios reporter who broke the story was engaged in a politically motivated “campaign” against the National Security Minister.

“In the last few weeks when there were quite a few requests from senators, ambassadors, consuls and international officials to meet with the minister, [the reporter] again chose to campaign against Minister Ben-Gvir,” the statement read.

“The minister is busy with the affairs of the ministry but nevertheless hopes to make time for these important meetings with diplomats from all over the world in order to continue strengthening Israel’s position in the world.”

The delegation, which also includes Democrats Kirsten Gillibrand, Michael Bennet and Mark Kelly, along with Republicans Dan Sullivan and Ted Budd, is slated to meet with Netanyahu, Knesset Speaker Amir Ohana and other Israeli lawmakers at the Knesset.

The lawmakers are part of the Senate’s Abraham Accords Congressional Caucus, which was established last year along with a parallel panel in the House of Representatives in order to expand the legislative branch’s role in promoting the normalisation agreements Israel signed with the United Arab Emirates, Bahrain and Morocco.