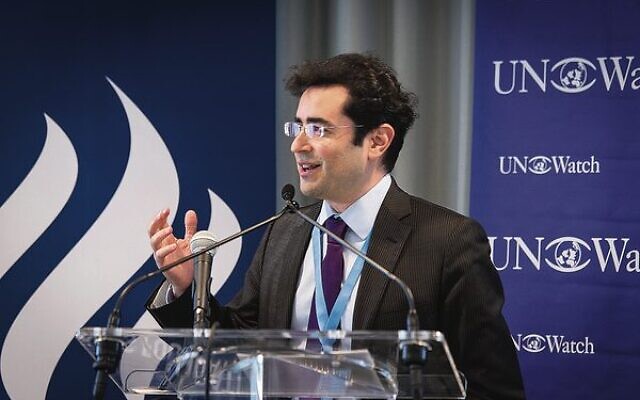 THE United Nations Human Rights Council (UNHRC) “is persecuting the Jews through the State of Israel, using the language and terminology of international law and human rights”, UN Watch executive director Hillel Neuer has told an Australian audience.

Addressing the UIA NSW AGM from a hotel in Brussels – where a UN Relief and Works Agency for Palestine Refugees in the Near East (UNRWA) conference was taking place – Neuer noted the many commissions of inquiry created by the UNHRC against Israel, saying, “I would say we’re almost in a mode of not inquiry, but Inquisition.

“The Human Rights Council, I would say is ground zero for the delegitimisation of Israel.”

But he said the UNHRC’s latest commission of inquiry, which will be ongoing, is especially problematic.

“It’s a permanent commission of inquiry on Israel and supposedly Hamas, but we know it means against Israel. It has no end to its mandate,” he said.

“This latest commission of inquiry has something new. It says it’s going to investigate ‘systemic discrimination’. I think they meant to use the word ‘systemic’, that’s the buzzword today in America.

“We know that they’re basically drawing on information from this horrific report written by Human Rights Watch [published in April that accused Israel of apartheid].”

“She was the leading defender of [the] Durban [conference] when groups like ours and others in your community spoke out against antisemitism,” he said.

“So we’re going to have a terrible report coming in June.”

To counter the UNHRC’s bias, he said, “You need to explain who stands behind the votes.

“We remind the world every single day in our tweets, in our press releases, that those sitting on the council are not Aristotle, Socrates and Plato,” he said.

“It’s China, Russia, Cuba, Pakistan, Venezuela, Libya, Qatar, Mauritania, Bangladesh, Bolivia, some of the worst countries in the world. 68.1 per cent of the Human Rights Council starting in January will be dictatorships or some other form of non-democracies.”

Addressing a question on why countries in the Abraham Accords have not changed their UN voting patterns, Neuer did recall a session where Bahrain was absent from a vote on Israel.

“We don’t think that the ambassador of Bahrain was absent by mistake. We think that was a nod to Israel and was extraordinary because European countries voted against Israel in that resolution,” he said.

UIA announced at the AGM that its campaign total for this year is over $25 million, while former Mossad head Yossi Cohen will be the keynote speaker for next year’s campaign.