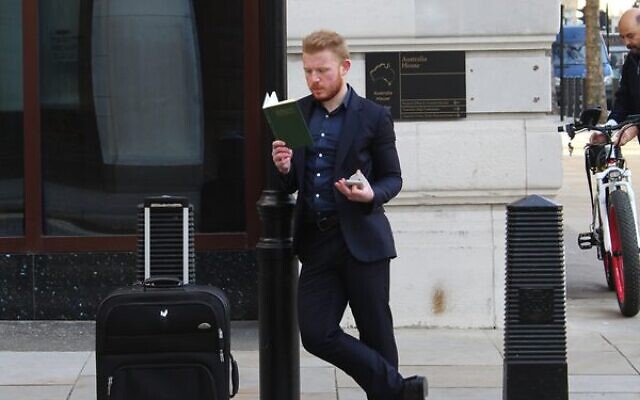 When Jack Vogler was six or seven years old, he received a Marvin’s Magic set for Chanukah and something in him clicked.

“I loved handling all these quirky-looking props, reading through the colourful instructions and then putting on a little show in the living room,” he told The AJN, discussing his upcoming performance at the Melbourne Magic Festival.

“I don’t think my family expected it to blossom into a real obsession and to have lasted all these years. Seven-year-old me didn’t know that I would later go on to be an in-store product demonstrator for Marvin’s Magic at the iconic Hamleys toy store in London’s Regent Street, selling the tricks that gave me a start in magic to the next generation.”

Vogler, who grew up in north-west London and was exposed to various strands of Judaism through his different family members, said that the first lockdown to hit the United Kingdom was an enforced break from work. Going straight into theatre after school, Vogler never took a gap year. So, he grabbed the opportunity, and of course, “travelled as far as I possibly could”, finding himself in Australia armed with a list of more than a dozen family members all scattered around the country.

“There was a moment quite soon after arriving when the adrenaline had faded and this visceral homesickness set in. I began to question what I was even doing here, nine and a half thousand miles away. All the warnings from my friends: the time difference, the distance, the isolation all came into a glaring focus – it was quite paralysing,” Vogler recalled, saying he wouldn’t have been able to get past the feeling without the community surrounding him.

Vogler’s show, The Expat at the Card Table, travels through his journey into magic. Believing that “most magicians are just big kids at heart”, Vogler attributes a lot of his fascination to a book he found in the school library, which he later discovered was considered the holy grail of all magic books – The Expert at the Card Table.

“It was a detailed treatise into the sleight of hand used by magicians and gamblers and it was published under a pseudonym, likely because the contents of the book were quite daring for 1902,” he explained.

In his show, Vogler attempts to uncover the identity of the mysterious author S.W. Erdnase, something many other magicians have attempted to do too.

Vogler is convinced Erdnase is actually German magician August Roterberg, saying the latter’s book was released at the same time and by the same publishers at Erdnase’s.

“Looking further into Roterberg’s life I found that, like me, he had packed up his bags at 23 years old and left home in search of a new future. He departed his native Germany for Chicago,” Vogler said.

“It made me wonder whether he also felt a bit like a fish out of water. Perhaps he was going through an identity struggle, which would explain the use of a pseudonym. It was a comfort to have come across his story when I too was feeling a bit out of place.”

The Expat at the Card Table promises to take audiences on a journey like no other, with magic and storytelling, touching on the topics of emigration, rediscovery and community.

“The thing I love about live theatre is its immediacy,” Vogler said. “Out of all the many art forms, there’s something about being in a room with people and sharing a story. It’s such an integral part of what makes us human.

When you add magic to the mix, with all its layers of mystery, surprise, and wonder, it elevates that even further into an experience that we rarely encounter in our day to day lives.”

The Expat at the Card Table will be showing at the Close Up Gallery – Arrow Hub. Dates and tickets.