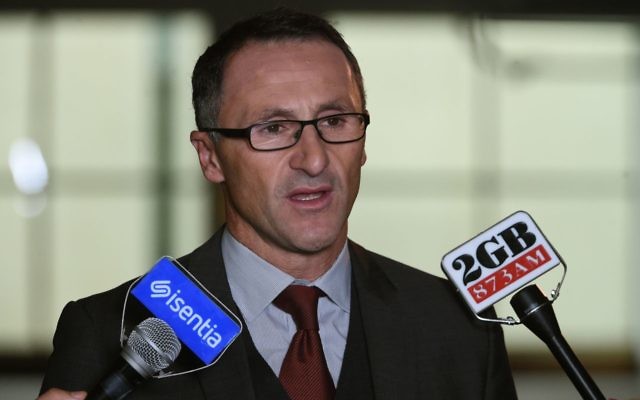 The AJN conducted a wide-ranging interview this week with the Victorian Senator, who replaced Christine Milne in the top job two weeks ago.

Among a multitude of issues of interest to the Jewish community that were discussed, Di Natale reiterated his support for a two-state solution.

“Most people who have followed this issue and care about it would acknowledge that there really isn’t any other alternative.”

Asked whether Abbas should recognise Israel’s existence as a Jewish state, Di Natale replied: “Of course. How can you have a two-state solution when you refuse to acknowledge the right of one state to exist? It’s patently nonsense.”

He also reaffirmed the Australian Greens’ rejection of the anti-Israel Boycotts, Divestment and Sanctions (BDS) campaign, in spite of the fact that Greens Senator Lee Rhiannon supports it.

“It’s just not the party’s position,” he said. “Some time ago we made a very clear statement that we didn’t believe that this was a pathway to peace.”

“Israelis are at the forefront of innovative technologies around that. Why wouldn’t we be learning from some of the new technologies that the Israelis have developed?” he asked. “If only Australia took a leaf out of their book.”

He said he would “absolutely” visit Israel if an opportunity arose to do so.

“There’s no substitute for seeing it with your own eyes. I’m told also it’s very beautiful – historically, geographically. I’d be very interested in visiting Israel and the region,” he said.

“It’s necessary in all circumstances for individuals to be able to criticise the actions of governments, whoever they are,” he said. “But clearly, where that line is crossed … that’s unacceptable.”

Di Natale stood with the Jewish community leadership last year against the federal government’s then proposed changes to the Racial Discrimination Act.

“Right across the spectrum I think there was an acknowledgment that those laws that existed were important,” he said.

“They were a bulwark against hate speech, and the signal that would have been sent if we had changed Section 18C would have been effectively giving the green light to some incredibly racist views.”

With much of the media touting Di Natale’s ascension as a fresh direction for the Greens, he agreed that it is also a “big opportunity” to re-engage with the Jewish community.

He said the Greens do have many Jewish supporters but conceded “there’s little doubt that there’s a strong view within the Jewish community about who the Greens are and what we stand for”.