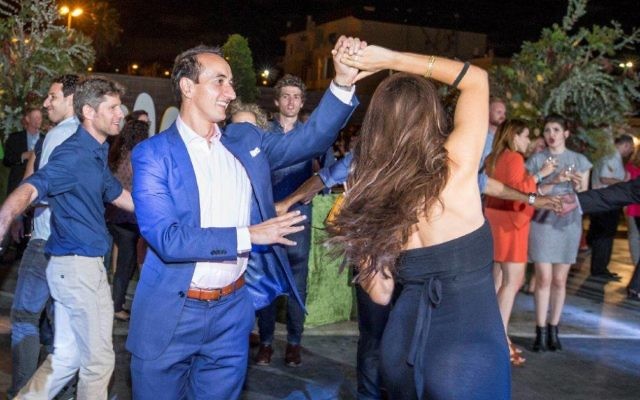 Dave Sharma at the Ozraeli Gala.

IN one of the most unusual diplomatic functions that Israel has seen, 350 people packed into a Jaffa courtyard to toast Australia-Israel “mateship”.

There were hardly any speeches and nobody uttered the word “bilateral” during the proceedings of the pre-Rosh Hashanah event. It was out with the formalities and in with ambassadorial tomfoolery, sardonic stand up, and didgeridoo practice.

The evening was the Australian ambassador’s twist on what he considers “that most dogged of diplomatic institutions”, namely the national day reception. For Dave Sharma, Canberra’s man in Tel Aviv for the last three years, having a good time is the best way to celebrate the friendship of two fun-loving nations. It was Australia’s way of building its “brand” in Israel, and this kind of event can be a model for a “new diplomacy” that is more based on actions than words.

When the DJ kicked off the Ozraeli gala, it was actually one component of what Sharma has designated Ozraeli season – a -month-long string of events that celebrate Australia-Israel ties. It included the clean-up of a northern Israel beach by a team of 120 Australian volunteers, and an open-to-all Australian rules football match in a Tel Aviv park.

Ozraeli season has also seen Sharma’s staff engaged in an ambitious new project: they are trying to establish direct flights between Israel and Australia, potentially knocking 10 hours off the travel time. Sharma told The AJN that the response from Israel’s Tourism Minister Yariv Levin is “super enthusiastic”. He said: “We’re looking at whether such a route would be commercially viable and commercially attractive and the back-of-the-envelope assessment is that it is.”

The gala event drew some -high-profile guests, including Mariah Carey’s fiance James Packer, the Australian inventor and business mogul whose Crown Resorts chipped in as a sponsor. Knesset member Amir Ohana, and America’s ambassador in Israel Dan Shapiro showed up. There were Australian expats, Israelis with business interests in Australia, and the founders of eight NSW-based start-ups, who have been selected to be the first users of Austrade’s Landing Pad facility in Tel Aviv.

It’s hard to find a lamington in Israel, but they were in plentiful supply, alongside the typically Israeli sweet treats like malabi puddings. People wandered from the meat pie station to the shawarma station, and onwards to the fish-and-chips stand. There was even a Tim Tam dispensary, with explanations about the biscuit’s cultural importance, notes on how to perform a “Tim Tam Slam”, and signage to say that Tim Tams are milchig, so the kosher-observant knew to taste the biscuit before tucking into their meat pies.

The evening included music from Ben Goldstein, who moved from Bondi to Israel and became a finalist on last year’s series of The X Factor Israel, and dancing led by professional dancers. Goldstein was sure to include Australian numbers, including Weather With You by Crowded House. In a small indoor area you could get some didgeridoo coaching and view Aboriginal art. One of the highlights of the entertainment was The True Story of the Australian Embassy in Tel Aviv.

The “never-before-seen documentary” was actually a mockumentary which exposes that embassy staff, while they act like Australians when people are looking, wearing cork hats and eating Tim Tams for breakfast, they have “totally assimilated” and become Israelis. Supposed hidden camera footage showed Sharma dressed in an eccentric outfit playing the Israeli beach game matkot, a diplomat listening to loud Hebrew-language music and another slurping loudly in a Tel Aviv cafe.

“When was the last time they hugged a koala?” the secret source for the documentary, who was eventually unmasked as Sharma, asked accusingly, saying that they “are just so Tel Aviv”.

The evening went down well with the guests, and they tended to stay for twice as long as they would spend on a normal diplomatic engagement. For Jeremy Saltan, a veteran political adviser in Knesset, it was part of a heavy itinerary of pre-Rosh Hashanah events hosted by different embassies. “The evening was very much out of the ordinary in terms of the common protocol of events,” he said. “It was very, very different to other events I have been to, and the video reminded me of a Purim spiel.”

Saltan said: “I have another three events this week, but will be talking about this for weeks and won’t be surprised if other countries try to copy this formula.”