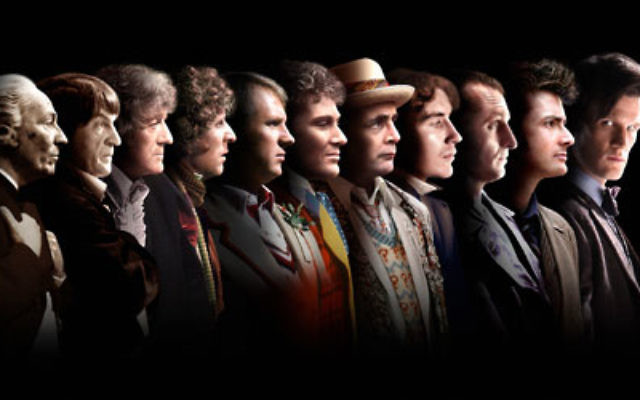 FROM Gallifrey to Gameworld Gamma and from the Library to the Lost Moon of Poosh, whether you’re a Cyberman, a Silurian or a Sontaran, this weekend throughout the entire Whoniverse, there’s only one topic on everyone’s lips (apart from the Daleks, of course, they don’t have lips) – the 50th anniversary of the longest running sci-fi series in human history (they’re such a cute race those humans!).

We’re talking, of course, about Doctor Who, a small screen institution that’s endured five decades and 11 regenerations – or 12 depending where you place the Valeyard – and after its resurrection in 2005, is now an international smash and one of Britain’s best exports.

In the early hours of Sunday morning (November 24), which is actually Saturday night elsewhere on Planet Earth (it’s a “wibbly wobbly timey wimey” thing as the 10th Doctor would have said), the anniversary episode will be watched by millions of Whovians, as fans are known, the world over.

And then, if you’ll excuse me misquoting Dorium Maldovar, “on the Fields of Trenzalore, at the fall of the Eleventh, when no living creature can speak falsely or fail to answer, a question will be asked – a question that must never ever be answered: Doctor Jew?”

The Doctor … Jewish? Surely not. Apart from the fact that a lot of Jews become doctors, there’s never been anything to suggest that the Time Lord keeps kosher. He’s never even said “Oy vey! Not those farshtunkene pepper pots again”, when he’s had a run-in with Davros’s deadly exterminators.

But, and this is a big but – although not as big as the butt that produced the Adipose dealt with by the 10th Doctor and Donna Noble, – the doctor might be eligible to help form a minyan. (That’s a minyan in shul we’re referring to, rather than a Minyan from the planet Minyos, as encountered by the Fourth Doctor in 1978, while travelling with Leela and K-9).

While we’re talking about the fourth doctor, it is worth noting that the man who played him, the incomparable Tom Baker – he of the unfeasibly long scarf – had a Jewish father.

And on the subject of Jewish performers, Carole Ann Ford, who starred as Susan Foreman way back in 1963 as the doctor’s granddaughter and first ever travelling companion, is also of the faith.

While we’re on the topic, River Song, who is kind of the doctor’s wife, is played by Alex Kingston and in the series Who do You Think You Are? she discovered that she had Jewish ancestry.

More significant though in the saga of our sonic screwdriver-wielding hero is the man who created him, the man without whom there would never have been a Doctor Who.

Step forward Sydney Cecil Newman, a Jewish TV producer from Canada, who moved to Britain in 1958 and became head of BBC drama in 1962. A self-confessed sci-fi fan, a science fiction show seemed the perfect solution when he was asked to come up with a program to slot in between the sports show Grandstand and the pop show Juke Box Jury on Saturday nights.

While he developed the format with other BBC luminaries, Newman is credited with coming up with the central character, namely the Doctor, the idea of the time-travelling Tardis, which is bigger on the inside than the outside, and the actual name of the show, although there is some dispute over that.

In tribute to Newman’s role as the “father” of the show, the 2007 episode Human Nature has the Doctor, in the guise of John Smith, referring to his parents as Sydney and Verity, while 2009’s The End of Time features a character called Verity Newman.

Lambert, who you’ll be delighted  to learn was also Jewish, helmed the show for two years before moving on to become one of the most respected figures in British television until her death in 2007. Her other credits included Minder, Jonathan Creek and The Naked Civil Servant.

For his part, Newman, who passed away in 1997, was also responsible for a number of hit shows, including that other iconic and quintessentially British series The Avengers.

So there you have it fellow Whovians. The answer to the question that must never be answered. Unless, of course, viewers are watching very closely this weekend and might spot a mezuzah on the outside of the Tardis.

PHOTO: A who’s who of  Doctor Whos from the past 50 years (from left) WILLIAM HARTNELL as The First Doctor; PATRICK TROUGHTON as The Second Doctor; JON PERTWEE as The Third Doctor; TOM BAKER as The Fourth Doctor; PETER DAVISON as The Fifth Doctor; COLIN BAKER as The Sixth Doctor; SYLVESTER Mc COY as The Seventh Doctor; PAUL McGANN as The Eighth Doctor; CHRISTOPHER ECCLESTON as The Ninth Doctor; DAVID TENNANT as the Tenth Doctor and MATT SMITH as The Eleventh