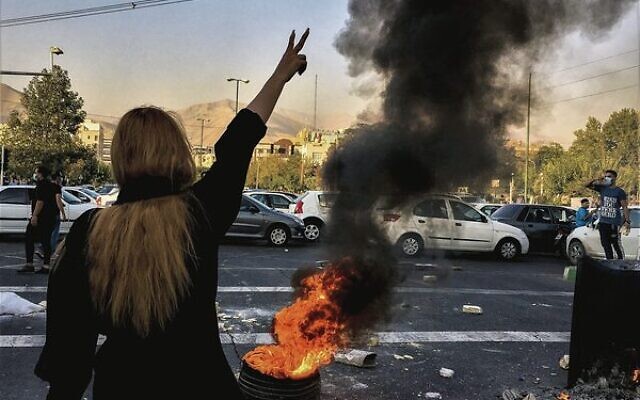 Iranians protest the death of 22-year-old Mahsa Amini after she was detained by the morality police, in Tehran, October 1, 2022. Photo: AP Photo/Middle East Images

The Executive Council of Australian Jewry (ECAJ) and the Australia/Israel & Jewish Affairs Council (AIJAC) have both made submissions to the Foreign Affairs, Defence and Trade References Committee in response to its inquiry into human rights implications of recent violence in Iran.

ECAJ said the recent events “follow a longstanding pattern of human rights violations by the Iranian regime since the establishment of the Islamic Republic in 1979”.

AIJAC said Australia has “long been out of step” with its allies in holding Iran to account, “Not only for the horrifying and pervasive human rights abuses against Iranians domestically, but also for its global sponsorship and orchestration of terrorism, its proliferation of drones and missiles to regional terrorist groups, its nuclear program, its hostage-taking and piracy, its assassination of dissidents and journalists across the world, its regional destabilisation and aggression, and its participation in Russia’s invasion of Ukraine via the provision of drones and missiles and advisers on the ground.”

Both AIJAC and ECAJ’s submissions called for Australia to impose further sanctions on Iranian officials and government agencies, for the Iranian Revolutionary Guards Council and Basij to be listed as terrorist organisations, and to remove Iran from the UN Commission on the Status of Women.

ECAJ also called for the tracking of Iranian funds to Australian charities and not-for-profits, and for Australia’s Smartraveller advisory webpage to provide more detailed warnings against travelling to Iran.

AIJAC urged the government to investigate Iranian regime propaganda activities in Australia and called for the government to “conduct a cost-benefit review … of maintaining an Australian embassy in Iran, with a view towards considering downgrading diplomatic relations and expelling Iranian diplomats based in Australia if appropriate”.

Last week, Jewish academic Kylie Moore-Gilbert, who was wrongfully imprisoned in Iran for more than two years, told the parliamentary committee that Iran has operatives in Australia who have been tracking her and others.

The request for submissions came amid Iranian government repression following mass protests, which began in September this year following the death of 22-year-old Mahsa Amini in a Tehran hospital, after she was arrested by Iran’s religious morality police for not wearing the hijab. Many believe Amini died from injuries caused by the Iranian police, leading to protests demanding an end to the mandatory hijab and accountability for Amini’s death.

The US-based Human Rights Activists News Agency reported that as of November 25, 2022, 448 protesters had been killed, including 63 children, and around 18,170 had been arrested.