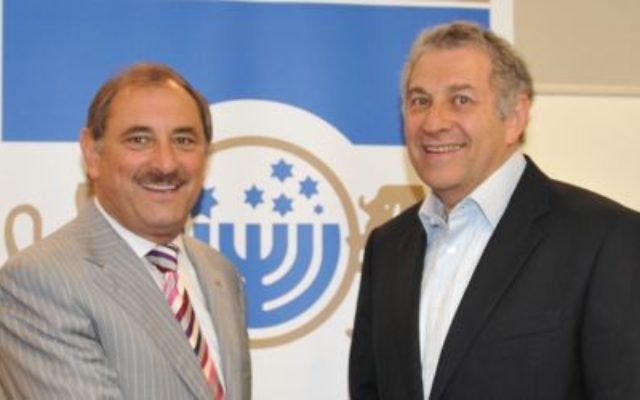 THE Executive Council of Australian Jewry’s (ECAJ) new president will have no trouble learning the ropes when he takes up the post in November.

Replacing Danny Lamm, former president Robert Goot is reprising the role he held from 2008 until 2010, under the ECAJ’s policy of rotating its presidency between Sydney and Melbourne every three years.

Goot told The AJN he was looking forward to taking the helm once again.“I think there is considerable work still to be done to build on the renewal of the ECAJ commenced in 2008,” he said.

Goot cited increasing ECAJ’s presence in Canberra, reinforcing bipartisan support for Israel, maintaining Section 18C of the Racial Discrimination Act and pursuing Australia’s membership of the international taskforce for Holocaust commemoration as aims for the next three years. “There are a number of other things, in terms of both our relationships with other organisations within the community and strengthening some of the smaller communities and the organisations that represent them,” he added, “as well as continuing to play an important role in the World Jewish Congress [WJC] and the Claims Conference”.

Goot is a vice-president of the WJC along with incumbent ECAJ president Lamm, to whom he paid tribute. “Danny has done a good job in maintaining the advances that were made in the three-year period commencing 2008, and the ECAJ is in good shape,” he said.

Lamm said his time at the ECAJ helm had been “a terrific opportunity to be engaged at the peak level for the Australian Jewish community”.

“We’ve done some tremendous and important things,” he said.

Lamm’s time in charge saw the ECAJ involved in countering the Boycott, Divestment and Sanctions movement, advising the federal government not to attend the Durban III Conference, and resisting a four-year campaign to ban shechitah.

The ECAJ also played a role in shaping the draft national modern and ancient history curricula, procured the signature of former prime minister Julia Gillard on the London Declaration on Combating Anti-Semitism, and worked with her to confer honorary citizenship on Raoul Wallenberg.

Lamm said he was leaving the ECAJ “in excellent shape” financially and it terms of its relationships with both constituent and affiliate organisations and the wider community.

“Robert’s got the experience of having done it before and now when he does it, he’ll find he’s got a bigger, stronger, more robust organisation,” Lamm said.