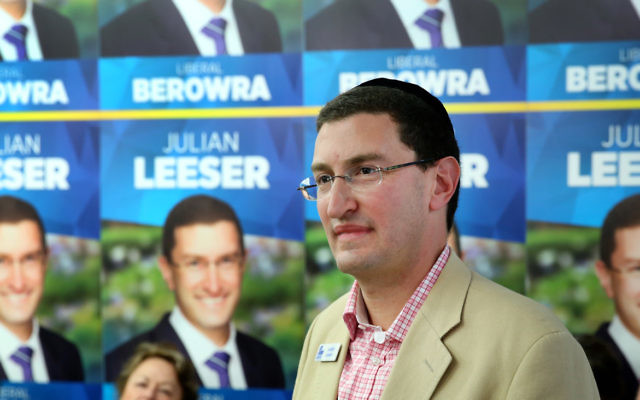 AUSTRALIANS have voted, and while the final results are still being determined, the country has elected three new Jewish politicians.

Julian Leeser became the first Jewish Liberal in the House of Representatives from NSW when he easily won the seat of Berowra, Dr Michael Freelander swooped to victory for Labor in the Western Sydney electorate of Macarthur with a swing of more than 10 per cent, and Stirling Griff from Adelaide earned a seat in the Senate as he was second on the Nick Xenophon Team ticket.

The three new politicians will join Liberal’s Member for Kooyong Josh Frydenberg, who was one of the few Liberal parliamentarians to increase their vote, Labor Member of Isaacs Mark Dreyfus and, in all likelihood, Labor’s Michael Danby, who is ahead as the count continues for the vital seat of Melbourne Ports.

It is believed to be the first time that six Jews would be elected to Federal Parliament.

Freelander told The AJN this week that he’s excited to get down to work for his constituents.

“People have given me their trust and now I need to work as hard as I can for them,” he said.

“This is a big change – my wife and I discussed it beforehand but it’s now really sinking in and it’s a little bit surreal.”

Freelander joked that his first job is to tell his kids that he can’t babysit as often anymore because he’s going to spend a lot of time in Canberra.

“I’ve had a really nice response from everyone, but it’s a daunting task I have now to fulfil their expectations.”

Leeser said – referring to the six Jewish politicians – that it’s very exciting and he wants to encourage other Jewish people to get involved in ­politics.

“There should be more, and I encourage all people in the political process to get involved in the community as well because it has really helped me get a better understanding of the problems that are facing the community.”

Frydenberg told The AJN this week that it will be fantastic to see so many Jewish politicians elected to Parliament House.

“For a long time the Jewish community has been well represented in the top echelon of the professions of academia and of business, and it seems there has been a catch-up occurring in politics.”

Describing the fact that so many Jews were elected as “a historic first”, executive director of the Executive Council of Australian Jewry Peter Wertheim said, “Nothing could better illustrate how fortunate we are to live in a society where every office or position, no matter how high, is within the reach of any citizen, regardless of his or her ethnic or religious background.”

He added, “Each of the new Jewish MPs brings outstanding qualities to the role of lawmaker. We wish all of them well for the future, and pray that they will be guided by wisdom and high principles in their work for the benefit of all Australians. We look forward to the day when we can celebrate the election of the first Jewish woman Federal MP.”