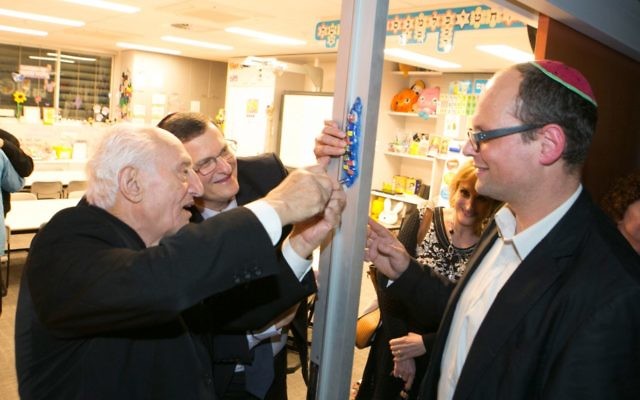 From left: Aron Kleinlehrer, Shmuel Ben-Shmuel, Tracey Waxman and Adam Carpenter, head of Jewish life (primary), affix a mezuzah made by students to the doorpost of a new classroom. Photo: Ofer Levy

Construction on the $9.5 million project began 18 months ago with the demolition of a two-storey demountable block and was made possible following a successful capital appeal in 2013.

In attendance at the opening were Member for Wentworth Malcom Turnbull – who, together with Israeli ambassador Shmuel Ben-Shmuel, fixed two mezuzot to classrooms – as well as Member for Coogee Bruce Notley-Smith; governors of the JCA; councillors from Waverley, Woollahra and Randwick Council; Jewish day school principals and many significant benefactors.

“Removing the demountable buildings and completing the construction of The Kleinlehrer Family LINC Building are symbols of our transformation from temporary to permanent, from standard facilities to state-of-the-art, forward-thinking facilities, from a lovely little school to a force to be reckoned with on the grand stage,” Emanuel principal Anne Hastings said.

“We have shown that we can dream big and, with the help of many, achieve that dream. No-one can measure the potential in each person to do amazing things, but the combined potential of many who work together is breathtaking.”

Emanuel board president Grant McCorquodale thanked everyone who contributed to the building’s success.

“Our donors, be they the children who gave up their pocket money or well-known community benefactors, have all made a difference to the future of our students’ education. To watch the students play, learn and grow in this new building is a privilege,” he said.

Head madrich Asher Klein, who has been at the school since year K and witnessed firsthand many of the changes that have taken place, said: “The LINC Building is beautifully designed, endlessly useful and has that Emanuel feel about it, and that’s not something you can really put your finger on.

“I’m astonished at how seamlessly the building has fitted in and, when future generations come to the school, I can feel really old and say, ‘I remember when that was just a hole in the ground.’”