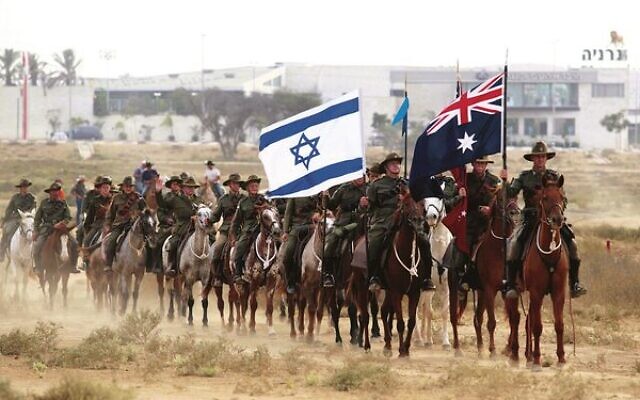 Australian men and women recreate the last cavalry charge of the Battle of Be'er Sheva on October 31, 2012. Photo: EPA/JIM HOLLANDER

At its latest meeting the Be’er Sheva Dialogue pursued a fresh path to advance security cooperation between Australia and Israel in the face of a worsening strategic outlook. The war in Ukraine and Chinese belligerence in our region cast shadows over the Dialogue, held in Canberra last week.

The Dialogue is the peak independent platform for security exchange between the two nations. It’s named after the Battle of Be’er Sheva, the historic triumph at Be’er Sheva led by British, Australian and New Zealand Army Corps troops on October 31, 1917. This year marks the 105th anniversary of the battle.

The Dialogue has advanced ideas to intensify the security relationship between our two countries in the eight years since it was co-founded by the Australian Strategic Policy Institute. Now that there are growing strategic threats, the Dialogue is stressing the need for our countries to work even more closely in a range of areas from defence, (establishing military to military talks, military college exchanges, military medicine, and Israeli defence production in Australia), cybersecurity, counter-terrorism, critical technologies like AI, quantum computing and machine learning and space, (working together on small satellite development and potentially launching Israeli satellites from northern Australia).

On Ukraine, Australian delegates heard how Israel had reached practical understandings with Russia to enable Israel’s military continued freedom of action against Iranian and other targets in Syria. There is continued Western pressure on Israel to provide Ukraine with air defence systems against missiles and kamikaze drone attacks. While Israel has so far refrained from providing such assistance, (although it has provided humanitarian aid), it was made clear that as a member of free liberal nations Israel is not neutral when it comes to superpower rivalry.

As laid out during the Dialogue, there is growing cooperation between three powerful autocracies: China, Russia and Iran, (with the latter’s continued use of proxies like Hezbollah and Hamas and supplying drones to Russia). Along with North Korea, the meeting discussed how this rectangle of rogues requires cooperation between our two states and partners in responding to a common challenge.

From a military perspective, the Dialogue noted how modern conflicts highlight the need for emerging technology and how Israel has been driven by urgency to have a rapid cycle for getting capability into the hands of its military. Australian delegates suggested that as we could now be drawn into a military conflict with little warning, we can’t afford our “slow food movement” approach to the enhancement of weapon systems required for high-end warfare. We can learn from Israel’s experience in how they acquire cutting edge capabilities. One suggestion was that Israel and Australia establish a counter-drone task force.

Participants discussed the strength of Russia applying hybrid warfare and information warfare techniques in Ukraine and how they had proven less impressive than expected. Israel and Australia could share insights on successful information operations with our allies and partners.

In our region, the Pacific Island states trust Israel. There’s a host of opportunities for our two countries in the South Pacific focused on practical issues in which Israel has expertise: climate resilience, health, agriculture, water filtration systems and green energy. The islands look to Israel to support their 2050 Strategy for the Blue Pacific Continent. Israel has included marine technology as one of its top research priorities. One Israeli company has, for example, developed marine friendly concrete for use underwater, especially relevant to the islands.

Deputy Prime Minister and Defence Minister Richard Marles in opening the Dialogue said: “Australia looks to Israel as an example of a nation which has been a leader in defence strategic thinking. Be it in regards to its defence industry capabilities – and the innovation system, economy and workforce built around that – or in regards to its deep cultural relationship with science and technology. As we look forward, we need to think about how we can continue to deepen our bilateral relationship, which also extends to the relationship between our militaries and defence industries.”

After eight successful years of the Be’er Sheva Dialogue putting more meat on the bone of our security relationship with Israel, there is much more to be done in working together in the heightened strategic circumstances both countries face. We need all hands to the pump.

Dr Anthony Bergin is a senior fellow at the Australian Strategic Policy Institute. He was a participant at the eighth Be’er Sheva Dialogue in Canberra last week. The Dialogue was co-founded and is co-hosted by the Australia/Israel & Jewish Affairs Council (AIJAC) with the generous support of the Pratt Foundation.
A version of this article appeared in The Strategist.